You are here: Home / Sports / Georgia has their issues on offense as well, but a tough assignment for Drew Lock in his first road start (VIDEO) 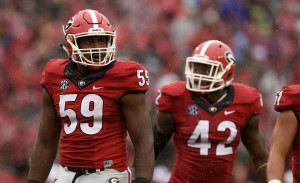 Drew Lock will face the Georgia Bulldogs in his first road game on Saturday at 6:30 CT (photo/GeorgiaDogs.com)

Mizzou and Georgia are looking to bounce back following last Saturday’s performance. Georgia fell 38-31 to Tennessee in Knoxville while the Tigers dropped a 21-3 Homecoming decision to 11th-ranked Florida. Georgia ranks fourth in the Southeastern Conference in scoring at 37.2 points a game while Missouri leads the league in scoring defense, allowing just 13.5 points a contest. Georgia’s scoring defense ranks eighth in the SEC at 24.7 points per game.

Both teams have two SEC losses and can’t afford a third.  After the year long suspension to Florida’s quarterback, the door opened up ever so slightly for someone to try to sneak past the Gators for the East Division.  The team that wins Saturday night in Athens may be the only team left that can make a charge.

Marc Weiszer from the Athens Banner Herald joins me to talk about how the Bulldogs will fill the gap of injured running back Nick Chubb who burst on the SEC scene last year, gaining 143 yards in Georgia’s 34-0 win over the Tigers.

They’re a team that has also struggled at times with their offense, particularly in third down conversions.  Georgia is converting at only 29 percent while Missouri checks in at 36 percent. The key will be the team that is able to sustain a couple of drives.  Which defense is left on the field longer will ultimately decide this game.

Marc also shares what the game day atmosphere will be like this evening for Drew Lock who makes his first collegiate road start.  Marc says it will be loud, but it shouldn’t be crazy like say a game at LSU or Bama.