Texas Governor Greg Abbott, or a soon to be fired staffer, jumped the gun on Twitter during Game 4 between the Royals and Astros. 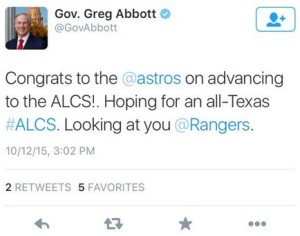 This came after Carlos Correa hit his second homer of the day and Colby Rasmus followed with a shot off Ryan Madson to put Houston on top 6-2.

What the Governor’s office in Austin soon learned is something we all should have learned from the late Yogi Berra. It ain’t over til its over.  But Royals fans, you certainly know that.

Alcides Escobar led off the eighth inning with a single and ended it with a strikeout.  In between were eight other batters who stormed back to score five runs and take a 7-6 lead, stunning the sold out crowd at Minute Maid Park.  Then in the ninth, Eric Hosmer added insurance with a two-run shot to make it 9-6.

Wade Davis pitched the final two innings to send the series back to Kansas City for game five on Wednesday night.  The Royals won in Houston for the first time this season.