(NASCAR)–Columbia NASCAR driver Carl Edwards has started round two of The Chase for the NASCAR championship with a solid sixth-place finish at Charlotte, the track where he won NASCAR’s 600-mile race during the Memorial Day Weekend.  The field of contenders will be narrowed to eight after the next two races at Kansas and Talladega.

Edwards, who calls the three-race elimination segments “brutal” had the fourth-best finishing record in the first three races.  ‘You have to treat every race like it’s the championship,” he says.

Edwards has won twice this year and considers the Kansas Speedway just west of Kansas City has his “home” track.  He has never won there, however. 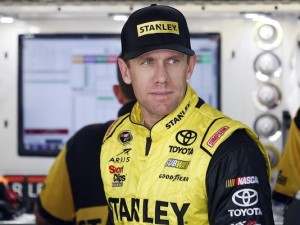 He told AUTOWEEK before the Charlotte race that he expects the four cars of the Joe Gibbs Racing stable to be factors in the final championship run. “We just seem to have all of the parts together. We work well as a group. We’ve got fast pit stops. We’re able to overcome things throughout the race.”

The Charlotte race was a struggle, however, for JGR.  Teammate Denny Hamlin finished fourth.  Kyle Busch was 20th, and Matt Kenseth, the winner of the first of the Chase races, crashed out of the race and finished 42nd.  Joey Logano won the race, holding off defending NASCAR champion Kevin Harvick by seven-tenths of a second.

Joplin’s Jamie McMurray, who narrowly missed making the second round of the championship run-off, was twelfth.  McMurray tied Dale Earnhardt Jr in points after the first three races but Earnhardt made the second-round because he had won a race during the regular season.

Sometime-Missourian Clint Bowyer was eleventh.  Bowyer has announced he will drive for HScott Motorsports next year before moving to Stewart-Haas in 2017 to replace three-time NASCAR champion Tony Stewart, who will retire after the 2016 season.

(FORMULA 1)—Lewis Hamilton picked up his ninth win of the year with a six-second victory in the Russian Grand Prix, tightening his lead in the driver points, and providing Mercedes with its second constructor’s championship in a row.   Hamilton’s main competitor, teammate Niko Rosberg, dropped out on the seventh lap with throttle problems.  Former F1 champion Sebastialn Vettel moved past Rosberg in the points standings with his runner-up finished.

(IndyCar)—James Hinchcliffe is back in a racing car, four months after a crash at the Indianapolis Speedway almost killed him.  Hinchcliffe was cleared by medical authorities in time to run an offseason test at Road America in Elkhart Lake, Wisconsin.

Hinchcliffe had qualified for the Indianapolis 500 but crashed during pre-race practice. A piece of the suspension pierced his thigh.  Quick diagnosis and action by the medical team at the track controlled extensive bleeding.

IndyCar icon A. J. Foyt has gotten a new right knee.  He’s back at home and expects to attend son Larry’s wedding next month.  Larry Foyt is the president of A. J. Foyt Enterprises and the director of the Foyt racing team.

IndyCar has told officials in New Orleans it will not run a street race there in 2016 after financial and weather problems dogged this year’s event last April.  The event also was poorly attended.  Officials in New Orleans remain hopeful the series will return in 2017.  Event organizers have been hit with lawsuits totaling more than one-million dollars filed by Andretti Sports Marketing, the promoters of the event, and the company that installed the grandstands.

Previous Post: « Keuchel sets a modern baseball record as Royals find themselves on the brink of elimination
Next Post: Missouri Department of Conservation expands pheasant hunting to statewide »