You are here: Home / News / Missouri fire officials stress use of smoke alarms

State fire officials are urging Missourians to make sure they have working smoke detectors during this, National Fire Prevention Week. The Week comes as Missourians have experienced a few cool nights and many have in recent weeks turned on the heat for the first time this season. 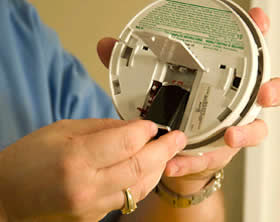 Missouri Fire officials are stressing the use of smoke alarms in and near all sleeping areas as part of National Fire Prevention Week. (courtesy; Missouri Division of Fire Safety)

Interim State Fire Marshal Greg Carrell said one of the themes of the Week is to urge the use of smoke alarms in and close to sleeping areas.

“The theme this year is ‘Hear the beep where you sleep,'” said Carrell. “That’s to drive home the fact that smoke alarms are still your best resource when it comes to getting out of a fire early on. You should have smoke alarms in each of your sleeping areas.”

“A lot of people read that as ‘bedroom,’ but you’ve got to remember that if you have a basement area downstairs, and maybe you’ve got a pull out couch that family or friends are staying on, that’s a sleeping area,” said Carrell. “You’ve got to have a smoke alarm down there.”

Carrell said other monitors could be needed too, depending on your heating source.

“If it’s going to be something that burns a fossil fuel – a kerosene, a propane-type heater, of course your furnace in your home, natural gas or propane – that carbon monoxide alarm also has to be there. All those things are also capable of producing carbon monoxide.”

A University of Missouri expert also recommends replacing smoke alarms that are more than 10 years old.