You are here: Home / Sports / Matheny lines up his playoff roster. Matt Adams off. Yadi and Waino on (AUDIO) 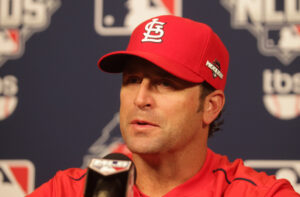 Cardinals manager Mike Matheny met with the media to answer questions following the club’s workout at Busch Stadium in advance of Friday’s game one National League Division Series with the Chicago Cubs.  Matheny laid out his four starters and bullpen, as well as the position players who will make up the 25 for the best-of-five.

Listen to Matheny’s Q & A