You are here: Home / Sports / Pinkel: “We can become even better.” Won’t talk about QB situation (VIDEO) 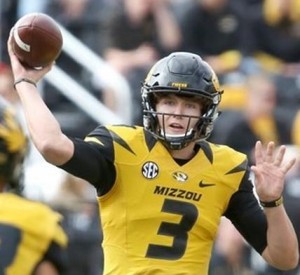 “Certainly, I’m proud of our football team for battling today. We came off a tough loss last week at Kentucky. This football team took it to heart and today’s game was really important to them. We played a lot better today as a team then we did a week ago. South Carolina’s a good football team. I’m pleased to come out of today with a victory. I think we’ve become a lot better football team this week. We can build on today and become even better.”

On the performance of freshman quarterback Drew Lock:

“Drew really did some good things for a young player. We were a little conservative (with play calling) in the second half. With some of the field position we had and trying to get our running game going – but I thought he really carried himself well. I thought that was good. He did a lot of good things and he has a lot of ability.”

On what seemed to click today for sophomore tailback Ish Witter:

“I just think he got going. I think he works better when we limit the carries for him. He and Russell (Hansbrough) are a real good 1-2 punch. We’re blocking better (as an offensive line). There were creases there today that I could’ve run through. He started to break more tackles and ran harder today. That was a big positive.”

On the performance of redshirt freshman defensive end Walter Brady:

“He’s a really good player. You look at all those freshmen and redshirt freshmen playing on the field today. It’s amazing. He really made some plays today and continues to get better and better. There’s a lot of competition there (on the defensive line) and I couldn’t be more pleased with their effort.”