You are here: Home / Sports / Yankees, Cardinals, MLB honor Yogi Berra after his death. The master of malaprops was also a darn good ball player (VIDEO) 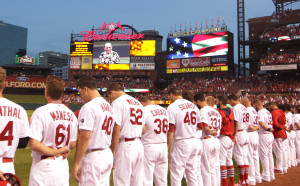 Members of the St. Louis Cardinals stand for a moment of silence for the late New York Yankee Yogi Berra before a game against the Cincinnati Reds at Busch Stadium in St. Louis on September 23, 2015. Berra, a member of the National Baseball Hall of Fame, was born in St. Louis and died at the age of 90 today. Photo by Bill Greenblatt/UPI

Major League Baseball lost one of its best when Yogi Berra died at the age of 90 on Tuesday night.  Ballparks throughout the league honored Berra on Wednesday night.  The Hall of Famer, New York Yankees legend and St. Louis native was loved by everyone who loved the game and even those who took an interest from the outside.

Berra died Tuesday night,  on the 69th anniversary of his Major League debut, at age 90.

Prior to last night’s game at Busch Stadium, there was a moment of silence and before the Yankees game, they paid tribute to one of their stars who is often overlooked by teammates such as Joe DiMaggio and Mickey Mantle.  Yet, Berra’s numbers were outstanding.

Berra led the Yankees in RBIs for seven successive seasons beginning in 1949. He was among the four leading MVP candidates each year from 1950 through ’56, placing second twice. He received MVP votes in 15 straight years.