(NASCAR)—New tires didn’t quite get the job done for Carl Edwards in the first race of the NASCAR championship chase series.  Edwards couldn’t run down teammate Denny Hamlin, who did not put during the last caution period, at Chicagoland Speedway in Joliet Illinois.

Edwards was one of several drivers who ducked into the pits when the yellow flag game out with eight laps to go while Hamlin and Kurt Busch, among others, stayed on track and hoped their older tires would hold up in the closing laps.  Hamlin and Busch were 1-2 on the restart and Hamlin finished .962 of a second ahead of the Columbia driver. 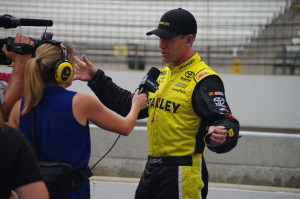 Edwards got a penalty for speeding in the pits and was a lap down at one point.  He also complained of undiagnosed engine problems that made him “real nervous.”  He told NBC Sports, “I heard a noise then it backfired the rest of the day but it hung on.”

Edwards moves to third in the Chase standings, one point behind Hamlin and three behind another teammate, Matt Kenseth. Fourth in the standings is Kyle Busch, who led the most laps in the race but finished ninth.  All four drive for the team headed by former NFL Coach Joe Gibbs.

Previous Post: « Magic numbers for the Cardinals and Royals as of 9/21/15
Next Post: Missouri lawmakers consider this week’s historic papal address »