You are here: Home / Sports / Manning shows he still has something left in the tank as Chiefs implode in final minute 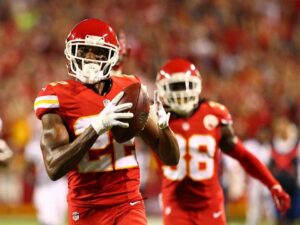 For the second week in a row, rookie Marcus Peters comes up with an interception. Peters picked Manning for a 55-yard touchdown (photo/KCChiefs)

Peyton Manning looked like a man who has seen the game pass him by.  That was the first quarter.  Manning then showed why we or anyone in Chiefs Nation shouldn’t dismiss the mastermind.  He ended the night with 256 yards and three scores, the final one going to Emmanuel Sanders with :36 seconds left to tie the game at 24-24.

With overtime approaching, the Chiefs handed to Jamaal Charles, who was stripped by Brandon Marshall and the ball bounced right into Bradley Roby’s hands, who raced in 21 yards for a touchdown to steal a 31-24 final.

Charles ran for 125 yards, mostly wrapped around two costly fumbles.  The game losing fumble and then one earlier in the red zone.  Not much Charles can say about that.

“I have to be careful with the ball,” Charles said. “It’s my fault.”

The only thing I can say to Andy Reid is “TAKE A KNEE!”

It was a sloppy game for the Chiefs offensively and the face they led this thing in the final minute was really surprising.  Alex Smith showed he has yet to step up as a premier NFL quarterback on the big stage.  He was picked off twice, including one for a touchdown.

The offensive line was pushed around and Smith failed to get a TD ball to a wide receiver.

The five turnovers from the Chiefs offense led to 14 points for the Broncos.

At the end of the day, this is still a Chiefs team that can’t figure out the Broncos and can’t figure out Manning.  They’ve dropped seven straight to Denver, and are now 1-14 against the Hall of Famer.