You are here: Home / Sports / Brewers pitcher Jimmy Nelson left game in third inning after getting hit by Pham (VIDEO) 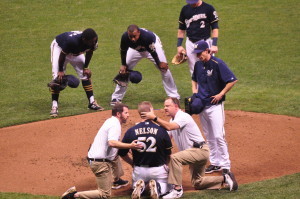 Jimmy Nelson tended to by Brewers training staff, after being hit in the head by a line drive. (photo/Wisconsin Radio Network)

The comeback liner in the third inning struck Nelson and then caromed into foul territory in front of the St. Louis dugout.  Nelson fell to the ground and lay face down and motionless for a few moments as the Brewers training staff rushed to his side.

Nelson eventually got to his knees, as  the crowd at Miller Park cheered for the Brewers right-hander.  He then got up and walked off under his own power, again with a huge ovation.

Nelson was taken  to a hospital for a CT scan but was “lucid”.