Peyton Manning is clearly on the back end of his Hall of Fame career.  His numbers are down and his ability to produce touchdown passes or even touchdown drives has dropped off.  Yet this team, around first-year coach Gary Kubiak, is being built around defense.  Alex Smith and the offense will have another big test after passing with flying colors in Houston on Sunday, when they host the Broncos as the Thursday night marquee matchup.

In the Broncos 19-13 win over Baltimore. Brandon McManus made four field goals – two from beyond 55 yards in the thin Denver air – and the Broncos limited the Ravens to 173 yards.  Denver also picked off Joe Flacco twice in the second half.   The first came from former Kansas Jayhawk Aqib Talib, who returned it 51 yards for  the Broncos only touchdown of the game and then Darian Stewart picked off Flacco at the goal line with 28 seconds left.

Alex Smith threw three first-half touchdown passes in the 27-20 victory at Houston, including two to Travis Kelce who finished with 106 yards on six catches.  Jeremy Maclin had five grabs for 52 yards and Jamaal Charles finished with 103 total yards, including Smith’s third TD.

As the Chiefs get ready for their home opener, they are making a big marketing push to call the day “Red Thursday!”  Andy Reid has even posted get out of work and school excuses for today! 🙂    Personally, if I was going to the game, I’d want an excuse for Friday, due to a sore throat from screaming my head off.

The Chiefs have lost the last six meetings between these AFC West rivals. 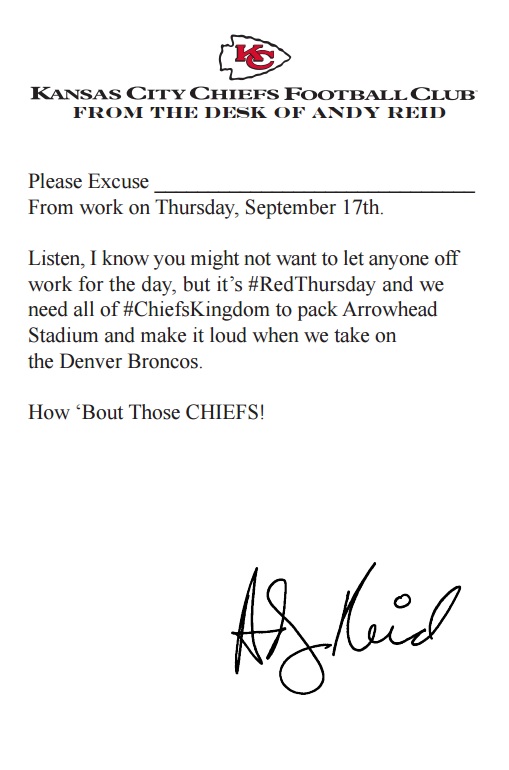 Previous Post: « Magic numbers for the Cardinals and Royals as of 9/17/15 (Updated at 2:45 p.m.)
Next Post: Decision on Wainwright’s availability for this season will be made on Monday, but best choice is to keep him off the playoff roster »