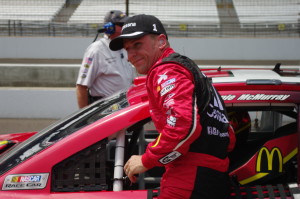 Joplin native Jamie McMurray has made NASCAR’s championship round for the first time after narrowly missing the field in several earlier seasons.  McMurray has finished the regular season tenth in points, his best points finish in his 13-year full-time career in the top NASCAR series. He makes the sixteen-driver Chase field as the highest-ranking non-winner this year.

McMurray finished thirteenth in this weekend’s race at Richmond.  He started 31st, charged to the top five by the 165th lap of the 400-lap race, but took a late penalty for speeding on pit road.

McMurray is joined in the 10-race Chase field by Columbia driver Carl Edwards and by Clint Bowyer, a Kansas native who has a home at the Lake of the Ozarks.  Edwards secured his spot in the Chase earlier with a win at Charlotte on Memorial Day, then picked up a second win a week ago. This is his eighth appearance in the Chase.  He tied Tony Stewart in Chase points in 2011 but Stewart was crowned champion because he had more wins.

Bowyer has qualified for the Chase on the basis of points. This will be his sixth time in the championship run-off. He calls the achievement “a monumental thing for an organization going through what we’re going through.’  Bowyer drives for Michael Waltrip Racing, which is going out of business at the end of the year.  He says he’s gotten a lot of telephone calls but is focused on finishing the year with MWR as strongly as possible.

The first race in the ten-race championship chase will be next Sunday at Chicagoland Speedway.

(IndyCar)—The ebay auction of helmets worn by the drivers in the IndyCar season finale at Sonoma will be up for auction on ebay, starting today (Monday).  The goal is to raise one-million dollars for the children of Justin Wilson, who died of head injuries in the next-to-last race of the year.  One helmet already has been sold—the on worn by Ryan Hunter-Reay, which was auctioned at a charity event during the Sonoma race weekend for $25,000.  Hunter-Reay and Wilson were teammates for Andretti Autosports.

The proceeds will be deposited directly into the Wilson Children’s Fund, which will benefit Wilson’s widow, Julia, and their daughters, Jane and Julia. Ebay is waiving all transaction fees for the auction.

The auction has been organized by fellow driver Graham Rahal, who organized a similar fund-raising auction for the children of driver Dan Wheldon, who was killed in a crash in 2011.