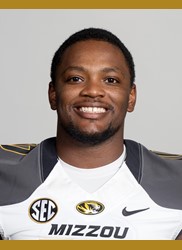 A 31-yard pass reception to DeSean Blair was called back because of offensive pass interference call on Sean Culkin.  Maty Mauk, on third and long, rolled to his right and forced a pass into coverage and threw his second pick of the night.  It was returned to the 13, but an unsportsmanlike conduct penalty on ASU pushed them out to the 28.

Despite an offside penalty giving the Redwolves a first and five at the 23, they couldn’t get a first down and had to settle for a field goal.

Kentrell Brothers picked off a pass from backup QB James Tabary and Mauk and the Mizzou offense went back and forth gaining 16 yards on eight plays.  The drive ended with a booming 41-yard field goal from Andrew Baggett.

ASU had one final chance with 1:27 at their own 11 following a 61-yard punt.  On their first play, Brothers came up with his second interception of the game to ice it.  Brothers finished with 16 tackles for the second week in a row.

Mizzou finished the game with three takeaways and three turnovers.  This was the Tigers 11th straight true road victory in a row.