You are here: Home / Sports / SEC Championship game will remain in Atlanta with new ten-year agreement and move to the new home of the Atlanta Falcons (VIDEO) 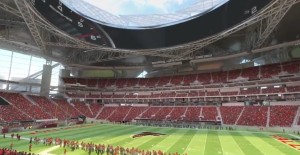 The Southeastern Conference announced an agreement to host the SEC Championship Game at Mercedes-Benz Stadium in Atlanta through 2026.  The new agreement allows the SEC the option of adding up to two successive five-year extensions. The ten-year agreement keeps the event in Atlanta beginning in 2017 in the new building.

Missouri fans are hopeful they will get the opportunity to travel there for several opportunities.

“Atlanta has served as an outstanding host for the SEC Football Championship Game for more than two decades and has been the perfect venue for one of the premier events in college sports,” said SEC Commissioner Greg Sankey.  “We look forward to continuing a very positive relationship with Mercedes-Benz Stadium and the Georgia World Congress Center as the home of our football championship.”

The new home of the Atlanta Falcons and Atlanta United, Mercedes-Benz stadium will open in 2017. The multi-purpose venue will feature flexible capacity  expandable for football events such as the SEC Championship to up to 75,000 seats; a retractable roof structure inspired by the oculus in the ancient Rome Pantheon; views of the Atlanta skyline; a 360-degree HD video halo board that, at nearly six stories tall and 1,100 linear feet in diameter, will be the largest in the NFL and the world; an exterior fan plaza providing fans with pre- and post-game entertainment; and a technology lounge offering a unique game-day experience full of media content and full game-day immersion.