by Bob Priddy, contributing editor (NASCAR)—Carl Edwards, Jamie McMurray, and the rest of the top NASCAR drivers had their last weekend off of the season this weekend. They’ll be at Darlington next weekend and then wrap up the regular season at Richmond before sixteen drivers start the ten-race run for the championship. Edwards has locked down one of the sixteen positions. McMurray needs two disastrous finishes at Darlington and Richmond to keep him out of the Chase for the Championship. He has more driver points than any other non-winner on the circuit. (SAFETY)—The death of IndyCar driver Justin Wilson last week after being hit in the head by flying debris from a crashing car has re-fired discussions of driver safety in the major racing circles. A look at the structure surrounding NASCAR drivers. The last fatality in NASCAR’s top series was that of Dale Earnhardt at Daytona in 2001. His death from a basal skull fracture led to the mandated use of the HANS device, which secures the driver’s head and neck in a crash. NASCAR since then has strengthened the roll cage surrounding the driver, moving the driver’s seat away from the side of the car, increasing the number of seat belts and seat designs, and mandating energy-absorbing materials between the roll cage and the outer skin of the car. 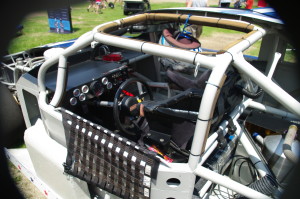 NASCAR also mandates cars have roof flaps that pop up when a car is going backwards which reduce (but don’t eliminate) the chance that a car will go airborne. Hoods and trunk lids also have to be tethered to limit the possibilities they will fly into the crowd during a crash. NASCAR tracks also have steadily increased the amount of energy-absorbing SAFER (Steel and Foam Energy Reduction)-barrier walls, which were pioneered in IndyCar. The steps have not eliminated injuries—witness Kyle Busch’s leg injuries at Daytona at the start of the year—but have enabled NASCAR national-series drivers to walk away from horrendous crashes. But NASCAR vehicles are closed-cockpit vehicles and the greatest concern heard since Wilson’s death focuses on open-cockpit racing cars, particularly those in IndyCar and in Formula 1. Formula 1 will run tests in September on designs that could provide better protection for drivers. The goal in Formula 1 as in IndyCar is to protect the driver without limiting cockpit access by the driver or by those helping the driver after a crash. The issue has been highlighted this year not only by Wilson’s death but by the near-fatal crash of James Hinchcliff during practice for the Indianapolis 500 when a piece of suspension penetrated the driver area of his car’s tub, went through one of his legs and into another, pinning him into the car while he was suffering serious bleeding. Safety crew members who quickly recognized the problem and devised a way to get him out of the wreckage and control the bleeding and getting him quickly to a hospital have been praised for their work. Suggestions have been made from time to time that the open cockpit era should end with the installation of a canopy similar to those used in fighter planes. The idea is hardly new. The Sumar Special, shown with owner Chapman Root,  practiced for the 1955 Indianapolis 500 in streamlined form. 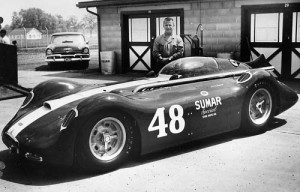 But driver Jimmy Daywalt ran it in the race with the canopy and the streamlining removed. Removing the streamlining, among other benefits, allowed Daywalt to see the front wheels.

That same year, Jim Rathmann had a streamliner, too. It wasn’t quite as radical as Daywalt’s car but it, too, had an enclosed canopy. 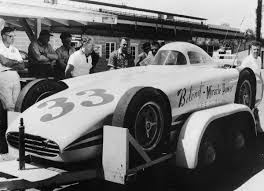 Rathmann ran the car in the race with the side pods in place but the canopy replaced by a standard windshield.  Daywalt finished ninth in the “500.” . Rathmann was fourteenth and won the race six years later in a conventional car.

Critics through the decades have complained that enclosed cockpits might provide more protection for the driver in open-wheel racing, they can affect visibility, delay a driver’s exit from the car after a wreck, and impair rescuers’ ability to extract an injured driver,  not to mention the heat that could build up in the cockpit, particularly in that era of front-engine cars. One proposal to be tested in F1 is something Mercedes calls a hinged “halo” that is mounted above a driver’s head, attached on both sides of the back of the cockpit and supported by a single strut in the front.  IndyCar officials say they have contacted the FIA, the sanctioning body for F1, and have asked that the information gathered in the tests be shared. (INDYCAR)—IndyCar has crowned Scott Dixon its champion to end its tumultuous season. Dixon entered the road race at Sonoma as one of six drivers with a shot at the title and won the race while Juan Pablo Montoya, who led the points chase for most of the year, finished sixth. The finishes left Dixon and Montoya tied in points, but Dixon’s victory was his third of the year, one more than Montoya, giving Dixon the title in a tie-breaker.   Montoya’s chance at the season championship was crippled during the race when he and teammate Will Power made contact, forcing both to the pits. They came out far back in the field and Montoya was one position short of the championship when the checkered flag fell. (FORMULA 1)—Formula 1 was off this week. It’s next race is the Italian Grand Prix at Monza. Points leader Lewis Hamilton will be seeking his seventh straight pole and his seventh victory of the year. (Photo credits: Cutaway stock car: Bob Priddy, 2015 Brickyard 400; Sumar streamliner: oilpressure.wordpress.com; Belond streamliner: trackforum.com)