Missouri’s U.S. Senators are split on the president’s proposed deal to end nuclear development in Iran.

After a prolonged deliberation, Senator Claire McCaskill (D) released a statement today calling the deal “flawed,” but saying it is better to go with it than reject it.

“I’ve spent weeks digging into the details of this agreement, and I’ve had extensive conversations with both those countries who are part of the negotiated agreement, and those countries currently holding Iran’s sanctioned money,” McCaskill wrote. “It is clear to me that there is no certainty that Iran’s resources will be withheld from them if America rejects the agreement. Instead, I believe it is likely that the sanctions regime would fray and nothing would be worse than Iran getting an influx of resources without any agreement in place to limit their ability to get a nuclear weapon. This deal isn’t perfect and no one trusts Iran, but it has become clear to me that the world is united behind this agreement with the exception of the government of Israel. I respect and understand those who oppose it but I have become convinced that it is more dangerous to Israel, America, and our allies to walk away in the face of unified world-wide support.”

“It’s going to cast a major shadow over the next decades. Our only hope would be that the Iranian government would totally change, and frankly by the time that happens, other countries in the neighborhood that don’t have nuclear weapons today are likely to get them in their view that they have to protect themselves against a nuclear weapons-capable Iran.” 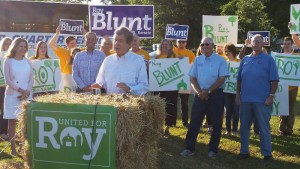 Senator Roy Blunt spoke to supporters and the media Thursday morning before the Governor’s Ham Breakfast at the Missouri State Fair.

“The president … said we would ensure that Iran would never have a nuclear weapon; we’d find out everything they’d ever done to prepare to have a nuclear weapon; we’d have anywhere, anytime inspections; and that the sanctions relief would not occur until we’d seen real progress in those other three areas. None of those things were accomplished,” Blunt told Missourinet, Thursday.

The plan, backed by President Barack Obama, aims to restrict Iran to development of nuclear power but not nuclear weapons, with its nuclear program subject to international inspections that would include Iranian involvement. It would also have to reduce its uranium stockpile and its number of active centrifuges. In return, international sanctions against Iran would be lifted.

Blunt believes Senate Republicans will get Democratic support to reach the 60 votes needed for a measure to reject the plan. President Obama could veto that measure and Blunt isn’t sure if there would be enough votes in the House or the Senate to overturn that veto.

He doesn’t criticize Senator McCaskill for taking the time that she did to contemplate her position.

“This is an important individual decision to be made. I think whoever votes for this is going to have to live with that vote for not only the rest of their political career, but seeing what it does in a very dangerous part of the world. On the other hand, that makes it a big decision to make. I’m not critical of any process anybody goes through in making that decision,” said Blunt.