Joplin NASCAR driver Jamie McMurray is holding on to his chance to run for the NASCAR championship although his car became the meat in a three-car sandwich early in the race.  McMurray’s rammed the back of a car ahead of him when a driver ahead of him botched a re-start and was then rear-ended.  Although he was able to get back on the track after repairs, he finished 40th in the 43-car field, four laps back. 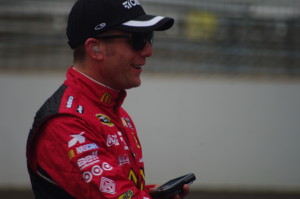 Joey Logano won the race, sweeping past Kevin Harvick on the last turn when Harvick ran out of gas.  Harvick coasted home third, behind Kyle Busch.

Columbia’s Carl Edwards and teammate Busch ran 1-2 until their final round of pit stops. Edwards came out 22nd but made it back to 8th for his fourth top-ten in the last five races.  Edwards, whose victory earlier this year at Charlotte, has locked him into the final ten-race Chase to the NASCAR championship, but McMurray has to hope he can either win one of the next four races or finish well enough to be the top non-winner in the points.   McMurray is ninth in the overall points count despite his bad day at The Glen.

Kyle Busch’s second-place finish moves him into the top thirty in NASCAR points. He must stay 30th or higher in the points to qualify for the Chase.  He has four wins, tying him with Jimmy Johnson for most wins this year.  But if he doesn’t stay in the top thirty, he won’t be eligible for the ten-race run-off.   Busch missed the first eleven races this year after a crash at Daytona in January left him seriously injured.

Next up for NASCAR: Michigan.

IndyCr and Formula 1 were idle this week.