The San Francisco 49ers released Aldon Smith following the 25-year-old linebacker’s arrest Thursday night on hit and run, driving under the influence and vandalism charges.  According to national media reports, the final straw came after Smith was bailed out of jail Friday morning.

49ers general manager Trent Baalke met with Smith after he was released from jail Friday morning on $26,000, and after Smith refused to take responsibility for his latest arrest, the team cut him.

Smith, a first-round draft pick in 2011, has now been arrested three times for drunken driving since leaving the University of Missouri and has had several brushes with the law.

The rap sheet on Smith:

January 2012:  Smith was arrested on suspicion of DUI, a charge that was later reduced to reckless driving.

September 2013:  Smith was arrested and charged with DUI again after a car accident. He voluntarily entered rehab and missed five games that season. In July 2014, Smith was sentenced to 11 days of work release for that DUI in Santa Clara.

August 2014:  Smith was suspended for the first nine games of last season for violating the NFL’s personal-conduct and substance-abuse policies, in connection to the 2013 drunken-driving arrest.

April 2014: Smith was arrested at Los Angeles International Airport. Police said he was randomly selected for a secondary screening and became uncooperative, telling a TSA agent he had a bomb. No charges were filed in that incident.

August 2015:  Smith is arrested for hit and run, driving under the influence and vandalism charges. 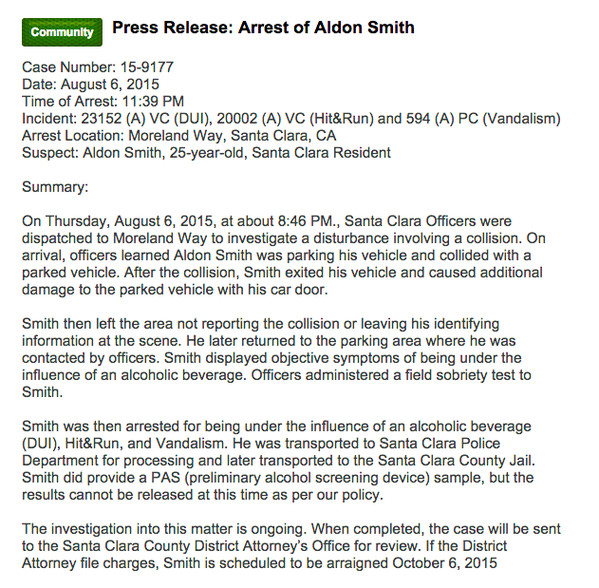