Father Tolton-Columbia basketball star Michael Porter Jr. has narrowed his list of schools down to ten, just days after his younger brother gave a verbal commitment to the Washington Huskies.  Porter made his announcement on Twitter on Wednesday.

“Excited to cut my list to 10! I Appreciate all of the other schools who have invested their time in recruiting me.”

Porter, who averaged 28 points per game as a sophomore last season, included Mizzou in the mix along with Kansas and Kentucky.

I’m sure many Tiger fans, if their school is going to lose out in the bid for Porter, would much rather see him choose Washington, UCLA, Stanford, Duke, Virginia, Syracuse or Indiana before the Jayhawks or Wildcats. 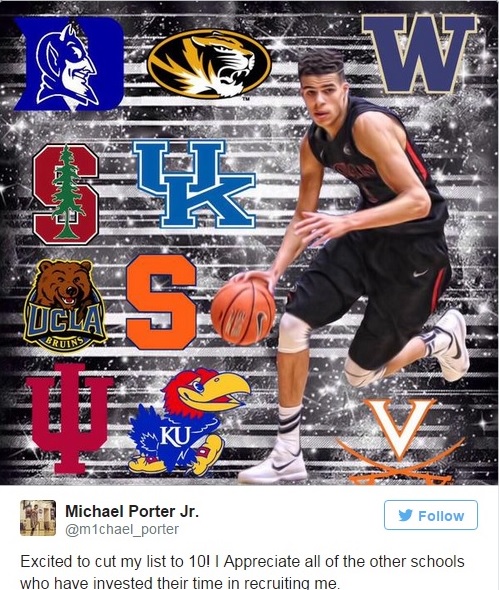 Previous Post: « Cueto pitches well, but remains winless with the Royals in two starts as Boyd baffles K.C.’s batters
Next Post: Richardson will plead not guilty to resisting arrest and numerous traffic violations after street racing in St. Charles County »