You are here: Home / Sports / High School Sports / One of the more unique ways to announce your college plans. Rockhurst wide receiver uses a monopoly board to select Wisconsin 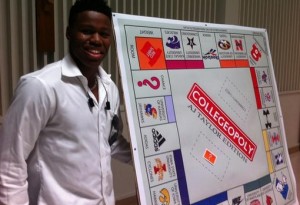 A.J. Taylor poses with his monopoly board. Photo from Randy Withers. Give him a follow on Twitter

Rockhurst High School athlete A.J. Taylor gets an A+ for creativity.  To help illustrate his decision to choose to play college ball for the Wisconsin Badgers, he used his own version of a Monopoly board to make his announcement.

Taylor is 5-11, 190-pounds and played a variety of positions for the Hawklets last season.  The top-rated high school player in the state of Missouri plays cornerback, running back and wide receiver for Rockhurst. He had more than a dozen D-I offers, including Mizzou, Kansas and K-State.

Taylor racked up more than 1,600 all-purpose yards with 16 touchdowns last season during his junior year, as Rockhurst made it to the Show-Me-Bowl and finished runner up the Class 6 finals.