You are here: Home / Sports / Broxton back in the Show-Me State. The former Royals pitcher joins the Cardinals after a trade with the Brewers 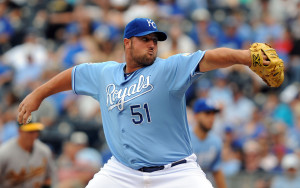 Jonathan Broxton pitches for the Royals in a game in 2012. Credit: John Rieger-US PRESSWIRE

Collymore was a 10th round draft selection by the Cardinals in 2013 who has been playing for rookie-level Johnson City this season.