You are here: Home / Sports / Garcia holds his own until a three-run blast from Votto in the sixth. Again, no run support for the Cardinals lefty 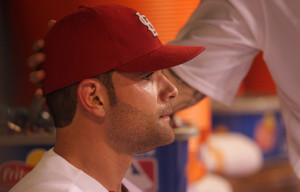 St. Louis Cardinals starting pitcher Jaime Garcia gets a pat to the head after coming out of the game in the sixth inning against the Cincinnati Reds at Busch Stadium in St. Louis on July 28, 2015. Cincinnati defeated St. Louis 4-0. Photo by Bill Greenblatt/UPI

Cincinnati first baseman Joey Votto is the hottest hitter in the majors out of the All-Star break. He’s hitting .561 with four homers and nine RBI. His home run in the sixth inning off Jaime Garcia broke a scoreless tie and led the Reds to a 4-0 win over the Cardinals on Tuesday night.  Votto also walked, singled and doubled, and scored the extra run in the ninth after his three-run blast earlier.

Jaime Garcia (3-4), activated from the 15-day disabled list earlier in the day, made his first start since June 24 and gave up three runs and four hits in six innings. He is 10-3 against the Reds, including 7-1 at home, but again the offense wasn’t there to back him up.  In four of his eight starts this season, the Cardinals have been shutout.

“I don’t even pay attention to that (lack of run support), their pitcher did an amazing job and he battled,” said Garcia after the game.

Mike Leake held the Cardinals to four hits over eight innings to win his fourth straight start. The Cardinals just ran into a hot pitcher.  Leake has allowed just two earned runs in his last 30 innings for a 0.60 ERA.