You are here: Home / Sports / Royals power up to take the opener of a doubleheader from the White Sox 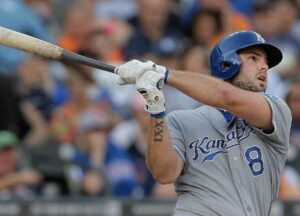 Mike Moustakas and Alex Rios each homered to lead the Kansas City Royals to a 4-2 win over the Chicago White Sox in the first game of a doubleheader.

Facing Kansas City for the first time since he was suspended five games for his role in April’s benches-clearing brawl between the teams, Jeff Samardzija (6-5) struggled, allowing all four Royals runs on seven hits and three walks in seven innings.

Samardzija’s counterpart, Chris Young, allowed two home runs as well but generally limited the damage against him. Young (8-5) got the win despite allowing both Chicago runs on three hits with four walks in five innings.

“He had 84 pitches and his back was starting to get tight, so we didn’t want to take any chances,” said Royals manager Ned Yost.

The Royals, who own the best record in the American League, did not lose any momentum during the four-day All-Star break. After Samardzija walked Alcides Escobar to start the game, Lorenzo Cain doubled him in for a 1-0 Kansas City advantage.

Kansas City had a chance to add on by putting two runners aboard in each of the next two innings, but Samardzija was able to work out of trouble each time.

Soto tied the game in the third with a solo home run to left field, just over the glove of a leaping Jarrod Dyson.

Moustakas put the Royals back in front with a solo home run to center field in the fifth, but the White Sox again drew even with a homer in the bottom half of the inning, this time from Eaton.

Chicago had an opportunity to respond in its half of the sixth, but Ryan Madson retired Alexei Ramirez and Soto to end the inning and strand two in scoring position.

“We had second and third a couple times and didn’t cash in at all,” said White Sox manager Robin Ventura.

The White Sox brought the potential tying run to the plate in the ninth, but Greg Holland worked around Emilio Bonifacio’s one-out hit to record his 20th save.