Peter Kinder says he will forgo seeking a fourth term as lieutenant governor, instead entering what is so far a three-way race for the Republican nomination for governor in 2016. He’s basing his campaign in part on continued criticism of Governor Jay Nixon (D). 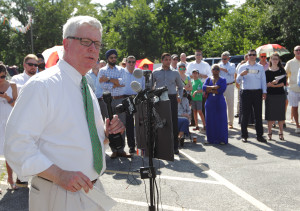 Standing in 96 degree heat, Missouri Lt. Gov. Peter Kinder announces he will seek the office of Governor during a press conference in Dellwood, Missouri on July 12, 2015. Kinder, who has been Lt. Gov since 2005 made his announcement near Ferguson, MO, the site of unrest and protests last year. Photo by Bill Greenblatt/UPI

Kinder announced his decision near Ferguson, and continued his criticism of how Governor Nixon responded to the unrest there following the Michael Brown, Junior shooting.

“Ferguson became a by-word for failure and lost hopes and dashed hopes and missed opportunity and a month’s long catastrophe that scarred the reputation of the St. Louis region … and the entire State of Missouri,” said Kinder. “Because government failed so badly in front and after the ninth of August, throughout August … throughout September, and then again in November, we have a lot of credibility to regain in state government. Let’s face it. The chief executive of Missouri state government let us all down.”

Kinder said he wants to be associated with the comments of Auditor Tom Schweich, who was critical of negative campaign tactics of Republicans he was running against in the governor’s race.

“I’ve been in some campaigns where the tactic of the opposition was to get buckets of slime and dump as much as they can over the heads of various opponents,” said Kinder. “I’m with the people who supported Tom Schweich in saying enough with the negative campaigning. Let’s campaign on the issues.”

He promised a campaign about political issues, and said he would offer a plan for ethics reform in Missouri.

Kinder, a Cape Girardeau native, joins a race against former Missouri House Speaker and U.S. Attorney Catherine Hanaway, Senator Mike Parson, and former state representative Randy Asbury. At least two others are considering running for the Republican nomination. Attorney General Chris Koster is the only announced Democrat in the race.