You are here: Home / Sports / Why Peralta’s heroics could be a turning point in this season for the Cardinals who gain split with Cubs 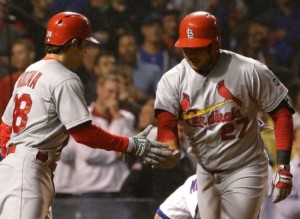 It’s hard to imagine that a game before the All-Star break, for a squad that has a winning percentage of .647, could signify a turning point in the season, but what happened Wednesday night at Wrigley Field sure felt like it.  Jhonny Peralta, down to his final strike, took a high pitch from Pedro Strop into the basket in left field, putting the Cardinals on top for a 6-5 win over the Chicago Cubs.

The win provided a split in this hard fought four-game series and it also kept the Cardinals lead to 4.5 over the Pirates with another four-game set in Pittsburgh.  This win also means, regardless of what happens this weekend, the Cardinals will hold onto first place in the NL Central into the break.

I say that swing from Peralta could be the turning point of the season, because prior to that, I was seeing a team that was starting to lose their composure.  Consider the following.

The Cardinals were coming off a double header sweep the day before with two starting pitchers who have no business being in the rotation…Tyler Lyons and Tim Cooney.  Both lefties, good for spots starts, do not seem like long term solutions for the rotation.  Their inability to finish the sixth inning taxed a Cardinals bullpen that faltered in both losses on Tuesday.

We’ve also seen ejections in each of the last two games.  Seth Maness got kicked out in Tuesday’s night cap for disputing a tough judgment call for the umpire in a situation that only tied the game at 2-2.  The team unraveled after that.  Then, in last night’s sixth inning, with Mike Matheny leaning heavily upon Michael Wacha to get out of his own bases loaded jam, he imploded after Wacha gave up a bases clearing double and lost the lead.  Matheny and Yadier Molina were kicked out for arguing a pitch that television clearly showed missed the zone. 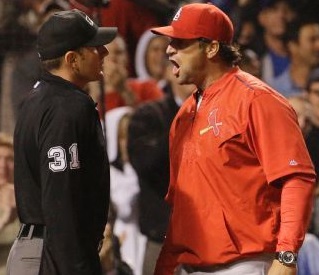 Matheny rolled the dice with Wacha for 109 pitches, his final seven, straight fastballs.  Ahead 0-2 in the count, Wacha never threw an off-speed pitch.  After running the count full, Montero fouled off a 3-2 fastball and then laced one into right center, another high 90’s fastball middle of the plate.  Matheny lost his composure and for the next two innings, the Cardinals looked like the team that was chasing an 8.5 game deficit in the standings and not the other way around.

The Cardinals will hold onto first place after Peralta’s heroics and in late September when we look back at the standings, if the Redbirds are still at the top, we might be able to point back to this game.  Had the Cardinals lost, their lead would have been 3.5 and mathematically possible for the Pirates to move ahead into first place after this weekend.

The question moving forward is, can Matheny keep this team together?  The Pirates aren’t going away and Cubs manager Joe Maddon said despite the loss, his club proved his team can hang with the Cardinals.  The pressure is squarely on the Cardinals.