You are here: Home / Sports / Hosmer helps the Royals with a walk off hit. Split leaves Royals up 4.5 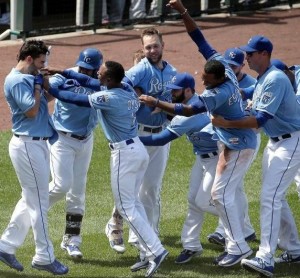 Eric Hosmer drove in Lorenzo Cain with nobody out in the ninth inning leading the Royals past the Minnesota Twins 3-2 to earn a four-game split and maintain their 4.5 game lead in the A.L. Central.

Cain walked against Blaine Boyer (2-4), who entered for Ervin Santana after his return from his drug suspension.

Aaron Thompson came in to face Hosmer, who hit one down the right-field line. Cain made it home safely, giving the win to Greg Holland (2-0) who earned the win with a scoreless ninth inning.