The state Supreme Court has upheld a change to the state Constitution that strengthens gun rights in Missouri. 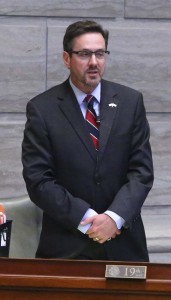 An attorney representing St. Louis Police Chief Sam Dotson had argued to the state Supreme Court the language voters saw in August didn’t explain everything Amendment 5 would do. The Court disagreed and said that the election results are valid.

Senator Kurt Schaefer offered that amendment in the legislature.

“It’s a victory for the rights of Missourians to keep and bear arms as they have the specifically enumerated right to do under the Missouri Constitution and the U.S. Constitution,” Schaefer told Missourinet.

Amendment 5 was approved by 60-percent of voters in August. It makes the right to keep and bear arms “unalienable,” and makes any law restricting gun rights subject to “strict scrutiny” in court.

The amendment removed a line from the state Constitution that said the right to keep and bear arms doesn’t justify concealing weapons.

Some opponents argue the amendment will let felons legally possess guns, but Schaefer says that’s still up to courts to decide.

“That’s really why when we made the change in the Constitution that we made it clear that it was an unalienable right and that the Court is to apply the most strict standard in anything by the government that attempts to take away that right,” said Schaefer. “It’s the courts’ job to determine what is an appropriate restriction, for example, for a felon with a dangerous or violent felony, as opposed to somebody who may have a felony for non-support on child support or something like that.”

The Court also said voters can challenge ballot issue summaries even after they’ve been approved by voters. The Attorney General’s Office had argued that the challenge to the issue should be dismissed saying it was filed too late, but judges said a challenge is not limited to being brought prior to an election.