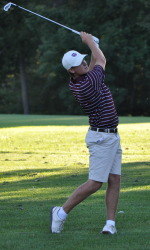 Johnson was seeking his third win of the Missouri Amateur.

Mather never trailed in the championship match. The Lebanon, Mo., native opened with an eagle 3 on the par-5, 578-yard first hole before he pared the second to go 2-up.

Mather and Johnson exchanged pars through Nos. 3, 4 and 5 when Mather birdied the sixth for a three-hole advantage. An Ozark, Mo., product, Johnson then claimed his first two holes of the day – the par-3 seventh and par-5 eighth with a par and birdie, respectively, to pull within one. Mather won the ninth with a par to take the turn 2-up on the 6,468-yard, par-70 course.

Mather won three more holes to Johnson’s one to sew up the title with three to play.

One other Missouri State golfer qualified for the top 64 match-play portion of the event as No. 19-seed rising sophomore John Fuchs made it to the round of 16. No. 22 Brauburger advanced to the final 32. Rising sophomore Brad Carpenter missed the match-play cut.

The field was whittled from 144 following 36 holes of stroke play on Tuesday and Wednesday.

Previous Post: « Next goal for Missouri LGBT community is a nondiscrimination act
Next Post: Salvador Perez leads Royals to finish sweep of Oakland »