(NASCAR)— Bob Priddy, Contributing Editor — Columbia’s Carl Edwards hopes for a repeat win on the road course in Sonoma, California ended early when a crash on a restart lap eliminated him and David Ragan as they dueled for sixth place.

Edwards had tried to pass Ragan on the inside of a right hand curve shortly after this picture was taken when his car bounced off the inside curb into Ragan’s car, sending both into the fence.

Joplin’s Jamie McMurray had another solid day in the office, finishing 11th, the tenth time in 16 races he has finished 11th or better.  McMurray is seventh in overall points and maintains his position as the leading non-winning driver eligible for the ten-race Chase for the Championship that concludes the season.

The picture has been complicated, however, by Kyle Busch’s victory at Sonoma.  In most cases, a victory would assure a driver a slot in the Chase.  But NASCAR requires a driver to be in the top 30 in the regular point standings to be eligible.  Because Busch missed eleven races after suffering leg injuries in a crash before the Daytona 500 at the start of the season, he stands only 37 with only ten races left before the field is set for the Chase. Ten other drivers, including Edwards, appear to have Chase positions locked up because they are within the top 30 in points.  Edwards is the lowest-ranking member of the winners group. He’s 17th on the overall points list.

Busch was trailed across the finish line by older brother Kurt Busch, the first time in their NASCAR Cup careers they have finished 1-2 in a race. They have competed against each other in NASCAR’s top series since 2005.

McMurray, Edwards, the Busch brothers, and their colleagues race next at Daytona on 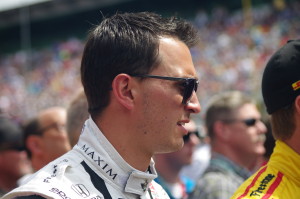 (INDYCAR)—Graham Rahal broke a 124-race winless streak with a win at the two-mile banked oval in Sonoma, California, in a race several drivers called “crazy” and that one leading driver called “insane.”   Rahal posted his second career IndyCar win, finishing just ahead of Tony Kanaan under the caution flag after Ryan Briscoe and Ryan Hunter-Reay tangled just before the white-flag lap.

The race set a record with eighty lead changes during he 250-lap event.  Fourteen drivers led at least once.  Rahal set a new IndyCar record for the longest time between victories. His only other win had come in 2008.

The aero package approved for the race by IndyCar allowed cars to run within inches of each other, often four and five-wide.  Defending national champion Will Power, who was knocked out of the race by a crash, called the pack racing “crazy, crazy, crazy” and noted, “When you have a pack race like what we had today, you have to take a lot of risks to gain track position.”   He was among those worried that such racing of a kind unseen since the Las Vegas race of 2011 that took the life of defending Indianapolis 500 champion Dan Weldon will lead to a similar situation unless changes are made to let cars get some space.

This year’s points leader, Juan Pablo Montoya—the winner of the Indianapolis 500 in May—told interviewers afater the race, “I was not a fan of the racing we put on today. What I told INDYCAR yesterday was that we shouldn’t be racing like this. This is full pack racing and, sooner or later, somebody is going to get hurt. We don’t need to be doing this.”.

Rahal called it a “hairy race,” and said afterward, “When you’re running up front, you’re hoping you’re with all the best guys. I was racing with (Tony) Kanaan and (Scott) Dixon and (Will) Power, and then (Ryan) Hunter-Reay a lot, so to trust those around you helps a lot.”

IndyCar’s next race will be July 12 on the Milwaukee Mile, the nation’s oldest automobile racing track.