You are here: Home / Sports / Not much rust for Lynn. Comes off DL and deals six scoreless innings as Cardinals sweep Marlins 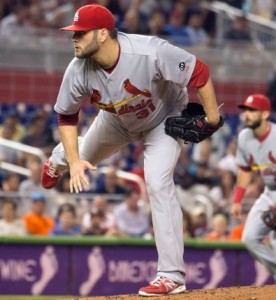 18 days of rest and healing from a right forearm strain didn’t hurt Lance Lynn’s first performance back on the mound.  Lynn threw 92 pitches covering six scoreless innings and the righty improved to 5-4 while lowering his ERA to 2.84 in a 5-1 Cardinals victory Thursday night at Marlins Park.  Lynn couldn’t have been more pleased with his return as he was able to get himself out of a couple of jams.

“To go out there and walk four and not give up any runs is a good feeling,” said Lynn, now 5-4 with a 2.84 ERA. “I was able to move the ball in and out and had good movement on all the pitches. I was able to mix it up when I needed to, so that was good.”

The Marlins mounted a couple of attacks after Lynn rolled through the first couple of  innings.  Lynn stranded two Marlins runners in the third, left a runner in scoring position in the fifth and then got out of Miami’s biggest threat in the sixth. After walking Giancarlo Stanton and Justin Bour with two outs, Lynn struck out centerfielder Marcell Ozuna to end the inning.

“He had command and that heavy sink,” Matheny  said. “The cutter was working well and he was climbing with the four-seamer, controlling counts and trusting his defense to make plays by pounding the zone.”

What’s more impressive is that he pitched with nothing more than a 1-0 lead.  The Cardinals scored three runs in the seventh to put the game out of reach.

Cincinnati beat Pittsburgh to increase the Cardinals lead to eight, while the Cubs, who come to Busch Stadium this weekend, lost to L.A.  Chicago is 8.5 back.