The U.S. Supreme Court has ruled that same-sex couples have a right to marry, striking down bans in Missouri and other states. 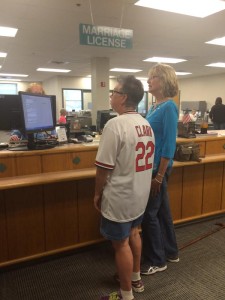 The court ruled 5-4 in a case that originated in four states; Ohio, Kentucky, Michigan and Tennessee.

“No union is more profound than marriage, for it embodies the highest ideals of love, fidelity, devotion, sacrifice, and family,” wrote Kennedy. “In forming a marital union, two people become something greater than they once were.”

Chief Justice John G. Roberts wrote a dissenting opinion saying the Constitution had nothing to say about same-sex marriage.

“If you are among the many Americans – of whatever sexual orientation – who favor expanding same-sex marriage, by all means celebrate today’s decision,” wrote Roberts. “Celebrate the achievement of a desired goal. Celebrate the opportunity for a new expression of commitment to a partner. Celebrate the availability of new benefits. But do not celebrate the Constitution. It had nothing to do with it.”

Missouri elected officials and lawmakers have weighed in on the ruling , some with praise, others saying it undermines states’ rights.

“The history of our country has always been one of moving toward inclusion and equality,” wrote Missouri Attorney General and Democratic candidate for governor, Chris Koster. “I applaud the court for their courage and strong sense of fairness. Missourians should be seen as equals under the law; regardless of their gender, race, or whom they love.”

Governor Jay Nixon (D) wrote in a statement, “Today’s decision in Obergefell v. Hodges is a major victory for equality and an important step toward a fairer and more just society for all Americans,” Gov. Nixon said. “No one should be discriminated against because of who they are or who they love. In the coming days, I will be taking all necessary and appropriate actions to ensure this decision is implemented throughout the state of Missouri.”

St. Louis Congressman William Lacy Clay (D) said in a statement, “This landmark ruling in Obergefell v Hodges affirms the fundamental constitutional guarantee of equal protection under the law for every American, regardless of sexual orientation or gender identity. No one has the right to tell someone else who they can love. And no one has the right to define someone else’s family.

“This decision is a major advance for civil rights and a victory for millions of LGBT Americans who deserve the freedom to marry and to have that life commitment legally recognized in every state.”

West-central Missouri Congresswoman Vicky Hartlzer worked to support the ban on same-sex marriage that was added to Missouri’s constitution in 2004. She issued a statement saying, “I am disappointed in the Court’s decision to stifle the voices of Missouri’s voters. Decisions on marriage policy should be left in the hands of the 50 states, allowing those who wish to define marriage as being between one man and one woman, as we did in Missouri, to do so. Today’s ruling tramples on the voice of the people. I will continue to champion marriage as the union between one man and one woman so every child has the opportunity to have both a mom and a dad.”