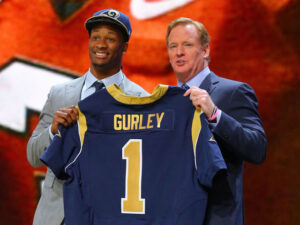 St. Louis drafted the running back from Georgia with the No. 10 pick despite a torn knee ligament that ended his 2014 season with the Bulldogs and still has him out of action.

The Rams also drafted receiver Bud Sasser in the sixth round, but he was waived after signing when a physical revealed a pre-existing heart condition that team doctors believe will prevent him from playing.