You are here: Home / News / Missouri trooper critical of Highway Patrol after drowning of Iowa man is disciplined

A trooper who has spoken out against the Missouri Highway Patrol after the drowning death of an Iowa man has been disciplined. 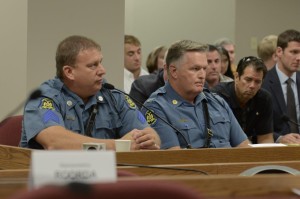 Within the past year, Randy Henry questioned the Patrol’s training methods and criticized how it handled the death of 20-year-old Brandon Ellingson, who drowned while handcuffed in trooper Anthony Piercy’s custody.  The Patrol has demoted Henry from the rank of sergeant to corporal and transferred him from the Lake of the Ozarks, where he had patrolled for nearly three decades, to the Truman Lake area.

Henry’s Attorney Chet Pleban of St. Louis calls Henry a whistle-blower and said the discipline is being appealed.

“The patrol has engaged in a course of conduct over the last year relating to Randy because Randy’s position is that the patrol is covering up this tragic incident,” said Pleban.  “He’s being punished by his own organization for telling the truth.”

“That interview was changed,” said Pleban.  “According to Randy Henry what Piercy told him hours after this incident was different from what he was saying later on.”