You are here: Home / Crime / Courts / Missouri carries out execution of Richard Strong

Missouri has carried out the execution of Richard Strong for the murders more than 14-years ago of his girlfriend and her two-year-old daughter. Strong was pronounced dead at 6:58 p.m. after receiving a lethal dose of pentobarbital at the state prison in Bonne Terre. 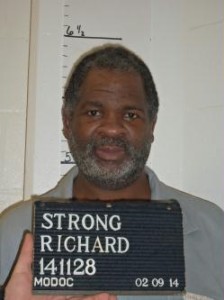 Strong was sentenced to death for the murders of 23-year-old Eva Washington and two-year-old Zandrea Thomas, at the apartment he shared with Washington in St. Ann.

The execution was witnessed by several members of the families of Washington and Thomas, but there were no witnesses in the room set aside for those present for Strong.

His two daughters, one of whom he spared on the night of the murders, and his mother had asked Governor Jay Nixon (D) to grant him clemency. They visited him earlier in the day along with a brother and sister-in-law.

The execution was also witnessed by St. Louis County Prosecutor Richard McCulloch, who prosecuted Strong for the murders.

Strong asked for a sedative and received a dose of midazolam about 22-minutes before the lethal injection began.

Strong appeared to be asleep when the execution drug was administered. He appeared to begin speaking to himself, raised his head and looked around, heaved deeply and puffed before laying his head down and becoming still.

His final statement was, “Jehovah-jireh, you’re my provider. Your grace is sufficient for me. Forgive me for my sin. Abba-Abba, take my soul in your hands.”

Strong’s attorneys had three appeals pending before the U.S. Supreme Court and Corrections officials were notified by 5:59 that those had been denied. Governor Nixon denied the request for clemency for Strong and that allowed the execution to proceed.

His is the fourth execution of the year in Missouri and the 16th since November, 2013, when the state Supreme Court began setting one execution date per month.

The execution had been scheduled to proceed at 6 p.m.  Its delay was shorter than the first two executions Missouri has scheduled for 6 p.m., a practice that began in March.