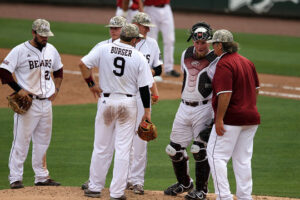 Arkansas rode an offensive outburst of 10 unanswered runs over a three-inning stretch to snap Missouri State’s 19-game win streak with an 18-4 decision in the opening game of the Fayetteville Super Regional at Baum Stadium Friday afternoon. UA scored three times in the fourth inning to erase an early MSU lead, then blew the game wide open with a six-run sixth to hand the Bears their first setback since April 25.

The Razorbacks touched up MSU starting pitcher Jon Harris for eight runs on nine hits over 5 2/3 innings and posted the biggest run total of the season by a Bears’ opponent to move to within one win of the school’s eighth College World Series appearance. Arkansas’ 18 runs represented the most allowed by MSU pitching since Feb. 10, 2010–a span of 340 games–and was made possible by a lineup that consistently produced in the clutch, as UA went 10-for-19 (.526) with runners in scoring position and hit .467 (7-for-15) with two outs.

Joe Serrano went 3-for-4 with four RBIs thanks to a pair of doubles and a three-run homer that capped UA’s pivotal sixth-inning rally, while Tyler Spoon drove in three runs and scored two more to lead the Razorback offense. Additionally, Tucker Pennell added a pair of singles and scored twice and Brett McAfee added two hits and two RBIs to help fuel the Razorback’s offensive explosion.

Missouri State, which had not allowed more than 10 runs in any of its first 58 games this spring, took a 1-0 lead on Jake Burger’s solo shot into the left-field bullpen with one out in the second. Harris appeared to be in peak form early, retiring the first nine UA hitters of the game in succession. Despite the junior right-hander’s early success, the Bears failed to capitalize on several scoring opportunities that could have extended their advantage. MSU, which recorded just one hit in 12 at-bats with runners in scoring position, left seven men on base through the first five innings.

Trailing by a run through three innings of play, Serrano ignited the momentum-swinging Razorback rally with a double to left that gave UA its first baserunner of the afternoon to start the fourth. Bobby Wernes followed with a line-drive single to right, and an intentional walk to Andrew Benintendi loaded the bases to set up Spoon’s two-run single that handed the Razorbacks a 2-1 lead. A sacrifice fly to center off the bat of Clark Eagan brought in Benintendi with the third UA run of the inning for a 3-1 advantage for the home club.

A two-out single by Pennell, followed by another Serrano double to left added to the Arkansas lead in the fifth after Harris had fanned the first two hitters of the inning. Benintendi’s 19th home run of the season kicked off UA’s sixth-inning scoring drive that was punctuated by four consecutive two-out hits, the last of which was Serrano’s three-run shot to left-center that made it a 10-1 contest.

The Bears answered the six-spot with a two-run rally of their own in the home half of the sixth, using a leadoff homer by Spencer Johnson and a Blake Graham run-scoring single to pull to within seven runs. Burger, who finished the day 4-for-4 and just a triple shy of hitting for the cycle, doubled for the 22nd time this season as part of the rally, breaking his own MSU freshman record.

But Arkansas kept the pressure on the MSU pitching staff, striking for two more runs in the seventh on an Eagan RBI double and a sac fly by Brett McAfee. The eighth inning brought another big UA rally, as the Razorbacks took advantage of four walks and a hit batsman to bat around for the second time in the contest. Eagan delivered the key blow, driving a two-run single through the right side of the Bears’ infield, before a groundout by Rick Nomura, a sac fly by Michael Bernal and a Carson Shaddy double stretched the lead to 18-3.

The Bears scratched out a run in the home half of the ninth after Dylan Becker walked and Tate Matheny brought him home with a sacrifice fly to left.

Trey Killian (3-4) earned the win for UA after allowing three runs on eight hits over his 6.0 innings, while three Razorback relievers combined to hold the Bears to just one run over the final three frames.

Harris (8-2) suffered just his second mound setback of the season after surrendering eight runs–the most of his three-year MSU career–on nine hits, while striking out three and walking one. Brad Archer provided the lone bright spot for the MSU pitching corps, working an inning-and-one-third without allowing a run.