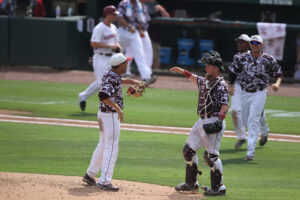 Matt Hall’s complete-game one-hitter propelled Missouri State to a 3-1 victory over Arkansas Saturday afternoon at Baum Stadium, forcing a deciding game Sunday at the Fayetteville Super Regional. On the heels of an 18-hit outburst by Arkansas in Friday’s opening game, MSU’s first-team All-American allowed just one baserunner through the first six frames and only one unearned run overall in his third complete-game effort as a Bear.

Hall (12-2) limited the Razorbacks to a first-inning single by Bobby Wernes and fanned eight hitters to eclipse the Missouri Valley Conference’s all-time mark for strikeouts in a season. The junior also matched Brad Ziegler’s Missouri State single-season wins record with his 12th mound victory that moved the Bears to within one win of their second CWS berth.

MSU grabbed an early lead thanks to a pair of Blake Graham RBIs and a Spencer Johnson run-scoring single. Hall would make the lead stand by retiring 16 straight Razorbacks before a seventh-inning rally gave UA its lone tally of the afternoon.

After taking a 1-0 lead into the fourth inning of Game 1 of the series Friday, the Bears got off to another strong start behind the pitching of Hall in Saturday’s contest. The left-hander allowed a one-out hit to Wernes in the first, but got Andrew Benintendi to line into a double play, then retired the next 15 Razorbacks in order, breaking Bryan Oelkers’ 33-year-old MVC single-season strikeout record with his third-inning punchout of Tucker Pennell.

The Bears’ offense was successful in the early stages of the game as well, putting multiple runners on base in each of the first five frames. A leadoff walk to Johnson–one of eight handed out by UA pitchers–sparked a second-inning rally for the Bears, as back-to-back hits by Justin Paulsen and Graham produced the first run of the afternoon. MSU struck for two more in the third, using singles by Tate Matheny and Eric Cheray as a springboard to a 3-0 advantage. Johnson’s RBI single to left brought home Matheny, before Graham drove in his second run of the game with a fielder’s choice bouncer to the mound.

Hall cruised through the first six innings, allowing just one baserunner while facing the minimum number of batters until issuing a walk to Joe Serrano to start the seventh. After a lineout to left off the bat of Wernes, Benintendi drew a four-pitch walk to give the Razorbacks their first runner in scoring position. Tyler Spoon’s fly ball to deep center pushed the lead runner to third, but Hall appeared to have worked his way out of trouble when Clark Eagan lined a ground ball to shortstop.

But Joey Hawkins couldn’t corral the hot shot, which skipped into left field to give Serrano ample time to cross the plate and end Hall’s shutout bid. However, Hall induced a one-hopper to third on the next pitch to Rick Nomura, and Jake Burger fired to first end the threat and strand the potential tying run.

Another leadoff walk–this one to Brett McAfee–started the eighth, but Hall coaxed a 6-4-3 double-play ball from Michael Bernal and retired Pennell on a grounder to third to preserve the lead once again. After issuing a third-straight leadoff walk to begin the ninth, Hall got Wernes to roll a fielder’s choice grounder to short before getting Benintendi foul out to first. Hall then capped his banner day by blazing an 0-2 pitch past Tyler Spoon for the game’s final out.

In addition to Graham’s two key RBIs, Johnson reached base safely in his first three plate appearances, scoring a run and driving home another to fuel the Bears’ offense.

Keaton McKinney (6-2) suffered the setback for UA after allowing the first MSU run on three hits and three walks over just an inning and a third. Jackson Lowery turned in a strong outing in relief of McKinney, giving up two MSU runs on three hits while striking out six over his 6.2 innings of work.

With the series squared at one game apiece, the Bears (49-11) and Razorbacks (39-23) will meet again Sunday (June 7) at 2:05 p.m. to determine which club will advance to the College World Series in Omaha.