You are here: Home / Sports / Wacha bounces back against the Dodgers and picks up his eighth win as Cardinals build division lead 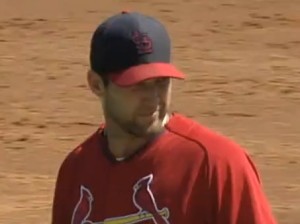 After suffering his first loss of the season five days to these same Dodgers, who not only broke up a no-hitter but went on to win 5-1, Michael Wacha responded by allowing just one run on seven hits and no walks over seven innings for his eighth win of the season.  The offense provided plenty of run support in a 7-1 victory in Los Angeles.

After defeating them twice in the 2013 NL championship series and shutting them out in 13 2/3 innings, Wacha didn’t feel a need for a drastic overhaul of his plan against L.A.

“I wasn’t trying to change too much,” said Wacha. “It was the same mentality going in there of attacking the hitters and throwing a lot of quality strikes.”

Wacha had all four of his pitches working spotting his fastball and hitting with his changeup and curve.  He also threw in a cutter that left his manager Mike Matheny impressed.  This was his seventh start in which he has allowed a run or fewer.  His shutout bid was broken in the sixth after three straight singles and a sac fly.

It seems like anything over two runs is insurance overkill and the Dodgers handed the Cardinals two runs early.  Jhonny Peralta and Mark Reynolds had RBI singles after a two-out error by third baseman Justin Turner on Matt Carpenter’s grounder in the hole and Matt Holliday’s single.  The Cardinals increased the margin to 5-0 in the fifth on Holliday’s sacrifice fly and Jason Heyward’s two-out, two-run single.