You are here: Home / Sports / Redemption, records and milestones highlight the Cardinals walk-off win and sweep of Arizona 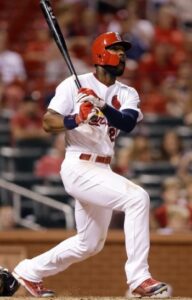 Never count this team out.  After making an error in the sixth inning that allowed the go-ahead run to score, Jason Heyward redeemed himself with a game tying home run in the ninth.  An error allowed the Cardinals to score the winning run to steal a 4-3 win and sweep of Arizona.  The win also increased the St. Louis lead back to 5.5 games in the Central with Chicago’s loss to Washington.

Heyward booted a ball on a single to right field that allowed a runner to score from first.  That put Arizona on top 3-2 in the sixth.  Nick Ahmed hustled from first when Heyward misplayed a hit by pinch hitter David Peralta.  The play scored two for Arizona.

“I try to catch everything all the time,” Heyward said. “But at times I find myself trying too hard to get there and come up too late.”

After failing to drive in a run by popping out with the bases loaded in the fourth, Heyward came through in the ninth by leading off the inning with a homer.

“Thank goodness I was able to tie us up,” said Heyward.

Peter Bourjas used his legs to help win it.  With the bases loaded, Jhonny Peralta hit one to third baseman Yasmany Tomas who threw home for a force out and catcher Jordan Pacheco tried for a double play but his throw went over the head of  first baseman Paul Goldschmidt head after Bourjos’ slid into the back of his back leg.  Matt Carpenter scored the winning run.

That’s the redemption part of the story.  For the record books, Matt Holliday set a Cardinals franchise record by reaching safely in 43 straight games to start the season, passing Albert Pujols’ 2008 standard. It’s the longest run in the majors since Derek Jeter set the big-league record with 53 in a row in 1999.

Holliday on his National League record (video from MLB.com)