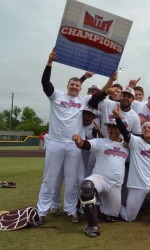 For the ninth time in program history, Missouri State has been selected to compete in the NCAA Division I Baseball Championship, where the Missouri Valley Conference champion Bears earned the No. 8 national seed and will host the four-team Springfield Regional at Hammons Field as part of the 64-team NCAA field that was announced Monday morning.

Making their second NCAA Tournament appearance in four seasons, the top-seeded Bears (45-10) will face the Canisius Golden Griffins in opening-round action at 6 p.m. (CT) Friday (May 29). The second-seeded Iowa Hawkeyes and third-seeded Oregon Ducks will meet in the opening game Friday at 1 p.m. All Springfield Regional contests will be streamed live online through ESPN3 (WatchESPN.com).

In their last Championship appearance in 2012, the Bears went 1-2 against the field at the Coral Gables (Fla.) Regional, sandwiching setbacks against UCF and Stony Brook with a 12-2 victory over four-time national champion and host Miami. Missouri State is 14-17 all-time in NCAA Division I Tournament play and has won at least two games in five of their last six trips to a regional since 1996.

Missouri State was one of three Missouri Valley Conference teams selected for the NCAA Tournament, marking the third time in the last four seasons the league has earned multiple berths in the Championship. MVC regular-season runner-up Dallas Baptist (43-13) also earned a top seed and the right to host the Dallas Regional, where the Patriots will face VCU in opening-round action Friday. Additionally, MVC Tournament runner-up Bradley (35-19) secured the second seed in the Louisville Regional and a date with No. 3 seed Michigan in the first round. Regional play continues through Monday (June 1) with a double-elimination format.

The 16 regional winners will advance to the Super Regional round, which will be contested June 5-7, with the eight winners of the three-game, head-to-head series moving on to the 2015 NCAA Division I Men’s College World Series at TD Ameritrade Park Omaha in Omaha, Neb., June 13-24.