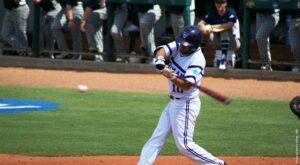 The Mercyhurst Lakers outlasted the Truman Baseball team 3-1 in 11 innings in the first game of the NCAA Division II National Finals on Sunday. T.J. Wood had two of Truman’s four hits and Cody Gardner pitched nine innings for the Bulldogs.

The Bulldogs were one pitch away from walking off in the bottom of the ninth. With the score knotted at one, Michael Venturella led off by drawing a four-pitch walked and was sacrificed to second by Jarod Hahn. Chris Iliopoulos walked on a 3-2 pitch and Wood walked to load the bases with one out.

The Lakers brought in closer Jake Hall to face Zak Larkin. Hall threw three straight balls to Larkin but got the next two to set up the payoff pitch. Hall painted the outside corner for the big strikeout to bring in Blake Deaton with two outs.

Deaton tried to surprise the defense with a bunt but got too much air on it to give Hall enough time to flip to the catcher to get the Lakers out of the ninth.

Both teams went scoreless in the 10th and Peter Young retired the first hitter in the 11th. Ryan Siegel singled to left and stole second. Brendan Cox lined a hit to left center to score Siegel for the go-ahead run. Mercyhurst added an insurance run aided by a throwing error to take a 3-1 lead. It was only the third earned run allowed by Young in over 29 innings pitched this season.

Truman tried to rally in their half as Hahn walked on four straight and Wood singled to left center following a strikeout. Deaton grounded up the middle and was punched out on a close call to end the game at first base.

It was a pitcher’s duel between Gardner and Colin McGee in the bright afternoon sun at the USA Baseball Training Complex in Cary.

McGee got out of an initial jam in the bottom of the first as Truman’s first two reached on a hit by pitch and walk. Two straight interference calls went against the Bulldogs to Paul Trenhaile and Dave Gambino. Trenhaile squared to bunt and tipped it into the catcher’s mitt, Jake Marinelli threw behind Larkin at second but the home plate umpire ruled Trenhaile obstructed the throw and called him out.

Gambino swung and missed at strike three but the ball that was inside hit him in the process calling the play dead and not allowing Larkin to score from third.

The Lakers took advantage with Hank Morrison tripling to right field in the second. Austin Alonge flied out to right scoring Morrison on the sac fly and the 1-0 lead.

McGee held the Bulldogs hitless through the first four innings and two-thirds innings. Wood broke the drough as he manufactured his own double with a shallow hit to left center. Larkin followed with a single to right center to tie the game at one apiece.

McGee threw 88 pitches in the first five innings as nine of the first 16 Truman hitters forced a full count. He departed in the seventh allowing two hits and struck out six.

The Mercyhurst fanned 12 Bulldogs on the day but Truman left 13 on the base paths.

The Bulldogs fall into elimination mode as they will face the loser of the Tampa/Cal-Poly game on Tuesday afternoon at 3 p.m.