(Charloette)—Columbia’s Carl Edwards wins NASCAR’s longest race, his first victory of the year after a slow start.  Edwards held off former teammate Greg Biffle in the final laps of the 600-mile race at Charlotte.  It’s his 24th career win but his first since switching from Roush-Fenway Racing to Joe Gibbs Racing during the off-season.

The win gives Edwards a spot in the ten-race chase to the championship that ends the NASCAR season.

Edwards and Toyota have struggled during the first third of the season.  “Toyota is back,” he said in victory lane.   Edwards let only 25 of the 400 laps including the first two and the last 21.   He becomes the ninth driver to win a race this year, a criteria for automatically 1ualifying for the championship runoff after the first 26 races.

Joplin’s Jamie McMurray finished 22nd, a lap down but remains 11th in the overall points totals and also would make the chase if it were to start todahy.  McMurray is looking for his first win of the year. 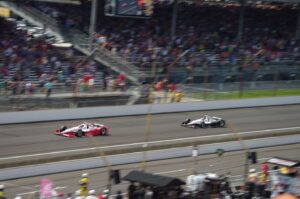 mate Will Power to the finish line  by  less than a half-second.

Montoya, who won the race as a rookie in 2000 before going to Europe to race in Formula 1 and then returned to this country to compete in NASCAR, was fifth last year in his return to Indycar.  He fought his way back from 30th place after pitting to repair some bodywork damaged when another car hit him during a caution period.

Charlie Kimball, driving for Rahal-letterman=-Lanigan, was third, his best finish in the 500, followed by Graham Rahal, Kimball’s teammate. Marco Andretti was fifth and Helio Castroneves was sixth, failing to become the fourt 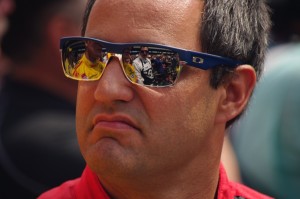 Scott Dixon, driving for Penske’s strongest rival, Chip Ganassi, started from the pole and led 84 of the 200 laps, faded to fourth late in the race.

Marco Castroneves finished sixth, failing to win his fourth Indianapolis 500.  Only three drivers have  won four times in the 99-race history of the event.

Montoya was one of ten drivers to lead the race. The lead changed 37 times.

Last year’winner, Ryan Hunter-Ray (reflected on the left in Montoya’s sunglasses, struggled all day and finished 15th.  Rahal is reflected in his other lens.

Five crashes and a caution period to remove a part that had fallen from one of the cars held the average speed to 161 mph.