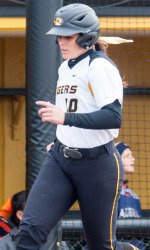 Senior 1B Kelsea Roth (Yorba Linda, Calif.) did not want Mizzou Softball’s 2015 season to be over. Her first of two solo home runs late in the 10th-seeded Tigers’ 10-6 setback to No. 7 UCLA helped extend the game, and her next in the bottom of the seventh kept Mizzou’s dream alive a little bit longer.

Head coach Ehren Earleywine’s squad ultimately bowed out to the higher-seeded Bruins (50-10) to end its campaign at 42-16, an impressive season record for one of Mizzou’s most consistent programs. The Tigers have been to the Super Regional round of the NCAA Tournament in seven of the last eight seasons and have averaged 45.7 wins per season under Earleywine’s watch.

With the score at 9-1 in UCLA’s favor in the bottom of the fifth inning, sophomore C Kirsten Mack (Riverside, Calif.) kept the game going with an RBI single to center field, scoring Fagan who reached on an earlier fielder’s choice.
Mizzou added three runs in the sixth inning, the first of which was Roth’s solo shot that assured the Tigers a seventh inning and avoided the run-rule. Crane tapped an infield single up the middle with the bases loaded to score senior C Alyssa Cousins (Carrollton, Texas). Two outs later, senior SS Corrin Genovese (East Amherst, N.Y.) earned a bases loaded walk to move in sophomore LF Natalie Fleming (Silex, Mo.) for a run.

A scary situation occurred during the fifth inning when a Bruin line drive struck Finucane in the head, resulting in Finucane exiting the game. Lowary returned and pitched the remainder of the contest.

Mizzou also blasted 79 home runs this past season for the second-best total in program history, trailing only 2005’s 82 long balls.