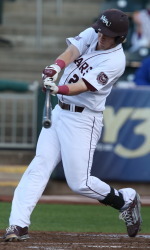 Missouri State followed a familiar pattern to complete its quest for the third Missouri Valley Conference Championship title in program history, overcoming a two-run deficit to post a 5-2 victory over Bradley Sunday morning at Eck Stadium. The Bears, who won their final 10 regular-season MVC contests to capture their fourth regular-season league crown, used the combination of clutch hitting and a shutdown pitching performance that included 4 1/3 innings of one-hit relief from its bullpen to complete the clean sweep of Valley championships.

Cory Kay came off the bench to spark a pair of MSU scoring opportunities, including the go-ahead rally in the seventh when he delivered a leadoff double down the left-field line. Kay, who went 2-for-2 with two runs scored, avoided a tag at third on Jake Burger’s fielder’s choice grounder, then scored on a Dylan Becker RBI bouncer to second to put the Bears on top for good.

Joey Hawkins added to the lead with a run-scoring single, then plated an eighth-inning insurance tally with a sacrifice fly to left that brought in Kay once again to stretch the margin to three runs following another leadoff hit by the senior outfielder.

Given the lead, MSU rode another standout effort from its bullpen to lock down the clubs’ first Valley Tournament title since 1997. After starting pitcher Andy Cheray limited the Braves to a pair of unearned runs on three hits in his 4 2/3 innings of work, Sam Perez (9-1) retired five consecutive BU hitters–including all three via strikeouts in the sixth–before Matt Hall fanned five batters in his 1.2-inning effort.

Bryan Young finished the combined four-hit effort and his Missouri State single-season record 14th save, working around a one-out single by inducing a game-ending 5-4-3 double play.

The Bears’ 22nd come-from-behind victory of the season did not come without a struggle, as a pair of early defensive miscues led to Bradley runs in the first and third innings. Chris Godinez came around to score the game’s first run on Elliot Ashbeck’s chopper to first after the BU leadoff man walked to lead off the first and moved to third on Hawkins’ throwing error.

BU (35-19) would strike again in the third, using a leadoff single by Evan Gruener to spark another scoring chance. Carson Weber’s sacrifice bunt advanced the runner to second, and Godinez moved him to third with a grounder to the right side before Becker couldn’t come up with Isaac Smith’s bouncer to third that allowed Gruener to come home for a 2-0 Braves lead.

Missouri State started its comeback in the fourth when Ashbeck beaned Tate Matheny with a one-out offering. Tournament MVP Eric Cheray continued his tear through the MVC Championship with a base hit–his eighth of the tournament–that allowed Matheny to move to third before a passed ball brought in the first MSU run of the morning.

An Alex Jefferson leadoff single started another rally in the fifth for the Bears, who used a sac bunt by Kay and a clutch two-out single by Becker to level the score at 2-2.

Cheray and Perez teamed up to shut down the Braves’ offense through the sixth, and Hall promptly fanned the first two batters he faced after taking over for Perez with one out in the seventh. The NCAA Division I strikeout leader, Hall retired five Braves via punchouts, including three in a row after walking Godinez to start the eighth.

Hall, who fanned 11 over 8.0 shutout innings in the Bears’ tournament opener Wednesday, was named to Valley All-Tournament team with his 16 K’s over 9.2 scoreless innings at the Championship. Becker, who batted .357, scored six runs and drove in four more, was named to the all-tourney team along with Hall, Matheny and Eric Cheray.

The Bears (45-10), who will bring the second longest win streak (16) in school history into NCAA Regional play, will learn their postseason fate Monday morning when the NCAA Division I Baseball Committee announces its first-round regional pairings and site assignments at 11 a.m. (CT) live on ESPNU. Regional host sites will be revealed by the NCAA on its website and various social media platforms Sunday evening.