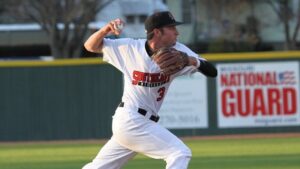 Southeast outscored its opponents 26-5 on the day. Branden Boggetto went 8-for-11 with nine runs batted in and five runs scored and had home runs in both games.

On the mound for the Redhawks, Alex Winkelman pitched a solid six innings in game one and Travis Hayes pitched a complete game in game two against TTU.

No. 1 Southeast Missouri will play No. 6 Belmont in game nine at noon Saturday.

Brendon Neel tied up the game in the top of the second inning with a three-run home run to left.

The offense never slowed down the rest of the day after Neel’s home run.

Southeast used a six spot in the sixth inning to break the three and a half inning tie. With bases loaded and one out, Neel grounded into a 6-4 fielder’s choice and got down the line to avoid an inning-ending double play; Dalton Hewitt scored on the play to break the tie. A walk to Trevor Ezell reloaded the bases with two out. Jason Blum, the school’s all-time leader in being hit by a pitch, took one off the shoulder to drive in another run. With bases still full of Redhawks, Boggetto launched a grand slam to left center, putting Southeast up 9-3 in the sixth.

The Redhawks plated three more runs in the top of the eighth inning. Southeast had three doubles in the inning, including a leadoff double by pinch hitter Garrett Gandolfo, a two-RBI gapper by Boggetto, and an RBI double by Hewitt. Southeast led 12-3 going to the bottom of the eighth.

The Gamecocks would get one run in the eighth but that’s as close as they would get to the Redhawks, 12-4.

The Redhawks outhit JSU, 13-9, and both teams played errorless baseball.

Boggetto paced the Redhawk offense going 4-for-5 with six RBI, a new career-high, and two runs scored. Alex Burridge and Hewitt each had two hits in the game; Burridge had two doubles. Neel finished the game with four RBI.

Taylor Hawthorne was 3-for-3 in the game with one RBI and Paschal Petrongolo had two hits.

Tony Urban (3-3) recorded the loss for the Gamecocks. Urban allowed five runs on nine hits. In all, the Gamecocks used five hurlers in the contest.

Southeast Missouri 14, Tennessee Tech 1
Tennessee Tech got on the board with an RBI double down the left field line by Tyler Brazelton; 1-0 TTU after one complete inning.

The Redhawks tied the game in the top of the second inning when Andy Lennington tagged up and scored on a sacrifice fly by Hunter Leeper. Southeast stranded the bases loaded in the inning.

Boggetto led off the third inning with a double knocked down the left field line. He immediately scored on a base hit through the right side by Hewitt, giving Southeast a 2-1 lead.

The Redhawks put up a nine spot in the top of the fourth inning to go up 11-1 on the Golden Eagles. Ezell had a double and a triple with two RBI in the inning. Southeast sent 13 men to the plate and all but one scored at least one run in the frame.

A three-run seventh inning, highlighted by a two-run home run by Boggetto and an RBI triple by Lennington, widened the lead to 14-1.

Hayes (8-6) went the distance for the first time this season. He allowed just the one run on six hits. He fanned six hitters and walked three.

Trevor Maloney (3-3) picked up the loss in relief. Maloney pitched one and a third innings, allowed five runs on six hits. Tennessee Tech used six pitchers in the game.