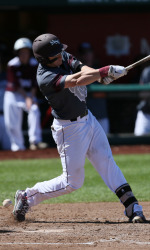 Missouri State took control of a see-saw battle against Wichita State with four unanswered runs to secure a spot in the title game of the Missouri Valley Conference Championship with a 6-4 victory over the Shockers Friday evening at Eck Stadium. Eric Cheray singled home a pair of runs–including the go-ahead tally in the fifth inning–and reached base safely in each of his five plate appearances to lead the Bears to their 15th consecutive victory and their fifth win over the Shockers in 2015.

With the victory, MSU (44-10) advanced to its seventh MVC tourney final and improved to 21-3 on the year versus Valley opponents. Additionally, its current win streak is the second-longest in the 52-year history of the program, trailing only an 18-game string of wins from April 16-May 16, 1989.

In a contest that featured four lead changes in the first five innings, the Bears delivered the decisive blow, scoring a total of four runs over a three-inning span to gain the upper hand for good. After the Shockers grabbed a 3-2 lead in the home half of the fourth, MSU answered immediately with two runs of its own in the top of the fifth. Tate Matheny’s one-out hit with a runner on first started a string of three consecutive Bears singles that turned the momentum one final time. Spencer Johnson’s RBI single brought home Dylan Becker with the tying run, before Cheray laced a 1-1 offering into right field to plate Matheny with the go-ahead run.

Becker, who started three of the Bears’ four scoring rallies, added to the lead in the sixth by circling the bases when his two-out line drive to center skipped past Daniel Kihle and rolled to the wall for a 5-3 MSU advantage.

Matheny’s third hit of the contest started the seventh and yet another scoring chance for the Bears. After a Johnson sacrifice and a walk to Cheray, Blake Graham’s bouncer to second loaded the bases after Cheray successfully avoided the tag and Graham beat the throw to first. Justin Paulsen drew a walk to force home another run that gave the Bears a three-run cushion.

The Bears’ relief duo of Sam Perez and Bryan Young teamed up to hold the lead and lock down MSU’s Division I-leading 20th road victory of the season. Perez retired the first four hitters he faced after taking over for starter Jordan Knutson with one on and two out in the sixth, and Young worked his way out of tight spots in each of the final two frames to record his 13th save.

Young, who saw his string of 19.0 consecutive scoreless innings come to an end when the Shockers plated a run with a pair of doubles and a walk in the ninth, closed the door with back-to-back strikeouts with the potential tying runs in scoring position. The sophomore right-hander fanned Tanner Kirk for the second out, before getting Bob Arens to look at a called third strike to end the game and the Shockers’ (26-33) season.

Knutson (5-1) earned the victory after allowing three runs on nine hits over his 5.2 innings, while Perez held the Shockers scoreless in his inning-and-two-thirds. Young’s 1.2-inning effort moved him into a tie for the top spot on the Bears’ single-season saves chart, equaling the 13 saves recorded by Shaun Marcum (2003) and Dan Kickham (2011).

The big finish for the Bears, who advance to their first MVC tourney title game since 2008, followed a back-and-forth battle in the early stages of the contest. After trailing for all but two of the first 37 innings played by the two clubs this season, the Shockers broke on top right away in the fifth game of the season series. Knutson promptly struck out the first two WSU hitters of the game, but issued a free pass to Ryan Tinkham to initiate a two-out Shocker rally. Mikel Mucha lined a base hit to left center to move the runner into scoring position and set up Gunnar Troutwine’s RBI single to center.

The Bears would respond in kind in the third, using a one-out double by Becker to kick-start their offense. After WSU freshman left-hander Jeb Bargfeldt (3-4) retired Joey Hawkins on a line drive to shortstop for the second out, Matheny drove a run-scoring double over the head of Sam Hilliard in right to even the score. Following a walk to Johnson, Cheray lined the first of his two run-scoring singles to left to hand MSU its first lead of the night.

Knutson worked his way out of a third-inning jam, stranding the bases full of Shockers thanks in large part to a key defensive play by Paulsen. With runners at first and second with one out, Mucha lined his second single of the game, but the MSU first baseman alertly threw behind the runner at third after cutting Matheny’s throw from center, resulting in the second out in the inning. The Bears’ left-hander then coaxed an inning-ending fly ball to right off the bat of Jordan Farris to preserve the 2-1 lead.

Wichita State capitalized in the fourth however, using another clutch two-out hit to reclaim the lead. Kirk’s leadoff single got the ball rolling for the Shockers, before Kihle drew a two-out walk and Hilliard reached on an infield single to keep the inning alive. Tinkham delivered to put WSU back in front, driving a two-run single to left that chased home both Trey Vickers and Kihle for a 3-2 Shocker advantage.

Cheray continued a torrid stretch that has seen the senior reach base safely via a hit or walk in nine of his last 11 plate appearances, finishing his night 3-for-3 with two walks and two RBIs. Becker scored three times with his 2-for-4 night, and Matheny logged three hits and scored three runs as well.

Missouri State will take on the third-seeded Bradley Braves for the Valley’s tournament title and automatic NCAA Regional berth at 7 p.m. Saturday (May 23).

Previous Post: « Redhawks stave off elimination twice, stay alive at the OVC Tournament
Next Post: Morales provides all the offense as Royals shut out Cardinals in series opener »