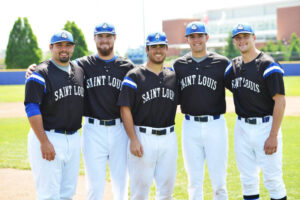 Saint Louis baseball finished the 2015 campaign with a 10-2 loss to the Davidson Wildcats in the Atlantic 10 tournament. Josh Moore (4-4) was hit with the loss.

The Billikens finish the season 35-21. It is the third-highest win total for the Bills under head coach Darin Hendrickson (finish with 41 wins in 2012 and 2013).

Davidson scored five runs in the second inning to take an early lead. Saint Louis plated a run in the bottom of the second off a Wildcat error.

Davidson plated one run in the third, one in the fourth, one in the fifth and two in the sixth. The Billikens were able to score in the fourth on an RBI double from Danny Mannion. The Bills almost plated a second run on the play, but a great relay from the Wildcats caught Colton Frabasilio at the plate.

Braxton Martinez and Frabasilio also had strong days at the plate. Martinez was 3-4 with two runs scored. Frabasilio was 2-4 on the day.

On the hill, Brett Shimanovsky threw three innings and completed the season without allowing a stolen base while he toed the rubber.