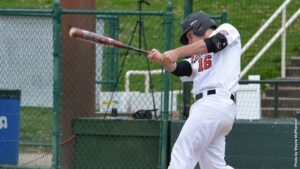 No. 1 Southeast Missouri will play No. 5 Jacksonville State Friday morning at 11 a.m. If the Redhawks win that game, they will turn around and play No. 4 Tennessee Tech at 3 p.m. in game seven of the tournament.

Joey Lucchesi started the game by delivering three-straight bases on balls. A double to left by Tyler Fullerton drove two runs in and a third scored on an RBI groundout by Nick Egli.

Alec Diamond drew a two-out walk, stole second, advanced on a wild pitch, and scored on a base hit by Drew Ferguson to make it 4-0 Belmont in the second inning.

Southeast got on the board in the bottom of the second inning. Dalton Hewitt led off the inning with a single to center. Hunter Leeper drilled a two-out double off the top of the left field wall to plate Hewitt and put the Redhawks on the board, 4-1.

Tyler Walsh was hit by a pitch with one out in the third, advanced to third on a double by William Dodd, and scored on a groundout; 5-1 Belmont after two and a half innings.

Leeper crossed home on a two-out RBI single by Blum in the fifth to cut into the Belmont lead, 5-2.

A two-run blast by Ferguson in the top of the ninth added a couple insurance runs for Belmont, 7-2.

The Redhawks had runners on first and third with one out in the bottom of the ninth, started by a triple by Ryan Rippee, but couldn’t capitalize on the late inning opportunity.

The Redhawks and Bruins each had six hits in the game and neither team committed an error.

Leeper paced the offense, going 2-for-4 with an RBI and a run scored.

Ferguson and Fullerton each had a pair of hits for Belmont while Ferguson had three RBI.

Lucchesi (7-2) recorded the loss. Lucchesi pitched six and a third innings, allowed five runs on four hits. He struck out six but walked seven. Aside from Ferguson’s two-run home run in the ninth, Zach Moore pitched a solid one and two-thirds innings and struck out three.

Alex Winkelman will take the mound Friday morning against the Gamecocks.