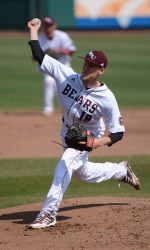 Missouri State scored seven times in the sixth inning of its MVC Championship matchup with Wichita State to pave the way to an 8-1 victory over the host Shockers Thursday evening at Eck Stadium. Jon Harris pitched 7.0 shutout innings, while Eric Cheray recorded three hits and drove in three runs to help the Bears win for the 34th time in their last 38 games.

After Cheray’s two-out single in the opening inning plated the first run of the night, Harris kept the Shockers at bay until the Bears sent 12 men to the plate as part of their sixth-inning rally. MSU took advantage of 11 walks handed out by WSU pitching, five of which came during a stretch in the sixth that saw nine consecutive Bears reach base safely to turn a one-run game into an 8-0 advantage.

Alex Jefferson sparked the key rally with a one-out double into the gap in left-center that chased home Justin Paulsen from first for a 2-0 MSU lead. Matt Fultz followed with an RBI triple to right, and Joey Hawkins chopped a run-scoring infield single following a walk to Dylan Becker. Back-to-back walks to Tate Matheny and Spencer Johnson forced home the fourth MSU run of the game, before Cheray’s single to center brought in two more tallies. After another walk to Matt Dezort, Paulsen capped the rally with a sacrifice fly to center that stretched the margin to eight runs.

For the second consecutive day in the tournament, the Bears jumped on top with a first-inning rally, this time cashing in on a pair of walks and a two-out single to take a 1-0 lead. With one out, Hawkins coaxed a free pass from WSU starter Sam Hilliard, who then fanned Matheny for the second out of the inning. Johnson kept the rally alive and moved the runner into scoring position by drawing a second walk from Hilliard, and Cheray’s liner found its way through the middle of the WSU infield to bring in Hawkins with the game’s first tally.

Given the early lead, Harris kept the Bears in front, although not without a fight from the Shockers. The right-hander would be forced to work his way out of tight spots in five consecutive innings, as WSU put the potential tying run in scoring position in each frame. In all, Harris would strand six baserunners in scoring position over his 7.0 innings, getting a lift from the Valley’s top defensive unit to squash a pair of those threats. Paulsen’s diving stop and flip to Harris covering first ended the third after WSU used a double steal to put two runners in scoring position. Then in the fifth, the Bears came up with another inning-ending defensive gem, as Becker initiated a rally-killing 5-4-3 double play on Ryan Tinkham’s bouncer with runners at first and third.

Harris, who fanned six Shockers on the night and scattered four hits, heated up in his final two innings of work, striking out two in the sixth to strand two more WSU baserunners before retiring the side in order in the seventh.

WSU got to reliever Sam Perez in the eighth for the first run scored against MSU pitching in 17 innings at the MVC Championship. Zach Merciez closed out the victory, however, striking out all three hitters he faced in the ninth.

In addition to Cheray’s three-hit effort, Jefferson finished the night 2-for-4 with a run scored and an RBI, while Hawkins singled, walked twice, drove in a run and scored two more.

Missouri State advances to play the winner of a Friday afternoon elimination game between Wichita State and Southern Illinois. The Bears will take on the survivor at 7:30 p.m., with a Missouri State victory securing a spot in Saturday’s championship game.