One chamber of the state legislature is in session on this final day. 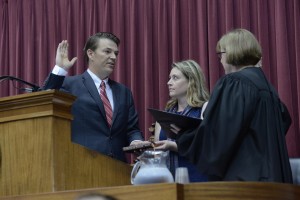 The state Senate delayed its start as Republican and Democrat leaders try to work out an agreement that can get the chamber working again, after Democrats have blocked debate for two days.

In the House, now former speaker John Diehl, Junior (R-Town and Country), has resigned after admitting to sexting with a college freshman intern.

“I am truly sorry to this body and letting everyone down,” said Diehl after presiding over the opening of the session. “But as I said on the first day I was up here, we’re going to hold ourselves to a higher standard, and that starts here.”

Representative Todd Richardson (R-Poplar Bluff) has been sworn in as the new speaker.

Recognizing the challenges facing the legislature in passing bills on this, the final day of the session, Richardson kept his speech short. After thanking his wife, children, and parents, who include former state representative Mark Richardson, Todd Richardson told the House, “Today is not a day for speeches, and today is not a day for rhetoric. Today is the day we get back to work, and that is what we’re going to do.”

The House is considering several measures it could potentially send to the governor without the Senate.