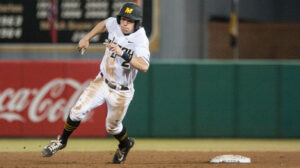 All three of Mizzou’s runs were driven in by underclassmen as freshmen and sophomores have now driven in 109 of Mizzou’s 220 runs this season (49.5-percent). Junior Josh Lester (Columbus, Ga.) extended his hit streak to 11 games, the longest streak by a Tiger this season. Brett Peel (St. Charles, Mo.) tallied his second consecutive three-hit game as well. The Tigers actually jumped out to a 2-0 lead after 2.5 innings, but LSU scored all eight runs over the third-sixth innings.

After threatening in the bottom of the first, squandering a leadoff hit from Peel the Tigers got to LSU starter Jared Poche’ in the third. Freshman Shane Benes (Town & Country, Mo.) fell behind 0-2 but roped a leadoff double into left field to get things going. With one out, Peel then tallied his second hit of the day to put runners on the corners. That led to an RBI sacrifice fly from Jake Ring (Ingleside, Ill.) who was robbed of a second RBI on a tremendous catch in center by Andrew Stevenson. Ryan Howard (St. Charles, Mo.) then doubled in Peel for his 15th two-out RBI of the season, a team-best.

LSU answered in the bottom of the third with a solo dinger from nine-hole hitter Danny Zardon. That seemed to rattle McClain, who walked the next two batters. LSU, which came into the game stealing bases at nearly and 80-percent clip, unleashed the running game. That led to four runs on four hits in the inning, giving the home Tigers a 4-2 lead headed to the fourth.

Mizzou then got a run back in the top of the fourth on a two-out, RBI single by Benes, his second hit of the day. The Tigers nearly got more, but Stevenson made another tremendous diving catch in center to rob Zach Lavy (Auxvasse, Mo.) of a hit and RBI.
LSU again answered in the bottom of the frame, plating a pair of runs, one off of McClain and another off of reliever Andrew Schwaab (St. Charles, Mo.). LSU reliever Doug Norman then retired Mizzou, 1-2-3, in the fifth and things settled down for LSU. Norman wound up winning his fourth game of the season.

LSU added runs in the fifth and sixth innings to open an 8-3 lead heading into the seventh inning. Mizzou couldn’t get anything going off of the LSU bullpen, stranding runners in the seventh, eighth and ninth innings.